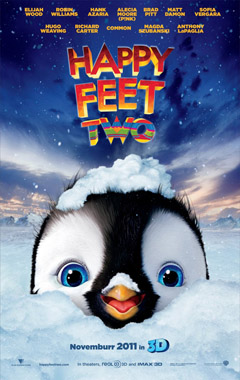 Admit it, Happy Feet set itself a pretty damn high standard. So it’s no wonder Happy Feet Two has been met with disdain by critics who have attacked it mercilessly like a mob.

However, this sequel isn’t awful. It’s not perfect, but it’s incredibly entertaining. As we all know, or maybe you don’t if you didn’t see the first one, Mumble (once again voiced by Wood) was a hippity hoppity emperor penguin who couldn’t sing to save his life. Then his penguin colony realized they could dance too! Mumble ended up getting together with crooning emperor penguin, Gloria (now voiced by Pink, replacing the late Brittany Murphy, RIP).

Happy Feet Two is the story of Mumble and Gloria’s little penguin, Eric (Acres), who can’t dance like his dad and doesn’t feel the “bug” to sing like his mother does. Being different from all the emperor penguins in his colony, he follows marginalized penguin Ramon (Williams) back to his hometown where he encounters Lovelace (also voiced by Williams) — the church minister slash pimp hippie penguin — who has gotten back, once again, from an “alien” encounter, bringing back The Mighty Sven (Azaria)… the “flying penguin.”

Sold as “the penguin savior” — I’m sensing a nudge to all the motivational programs in here — Sven sells the idea that if you want something, you must use your will to get it no matter how impossible that is. So little Eric gets the fantastic idea to become a flying penguin as well.

There’s more to the story, of course, but I won’t spoil more of it. Happy Feet Two still carries its environmental message, though it isn’t as hard-hitting as that scene when Mumble was at the zoo losing his mind — remember? The film also continues to provide laughs thanks to Williams being back as Ramon and Lovelace, as well as Hank Azaria. It’s no surprise since both of them are amazing at voice acting and have created some incredible voices throughout their careers.

A lot of laughs are also provided by the pair of krill, Bill (Damon) and Will (Pitt), who ventured out of the swarm of krill only to discover that they’re at the bottom of the food chain. Though their storyline is almost irrelevant to the film (“That’s one small step for a krill, one giant leap for a spineless invertebrate.“) reminiscent of Scrat in the Ice Age trilogy.

Surprisingly, there are a lot less “pop music” numbers. There are a couple of prominent medleys, and there’s a lot more beat-driven dancing, while Pink took over most of the singing, which were notably her best scenes and when she could emote the best with her voice. There might be a surprise or two in the soundtrack involving Puccini. That’s all I have to say.

Overall, Happy Feet Two might be slightly less complex (but equally predictable) than a movie like Puss in Boots, which deals with the betrayal of a long time friend and his redemption. But this one has truly impressive CGI with amazing details during krill scenes and stunning shots that look even more effective in 3D format.