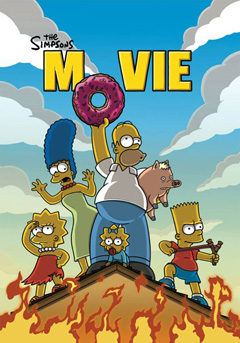 The Simpsons is one of the most popular animated television series of all-time and it was a matter of time to see it getting a film of its own on the big screen. And after 18 seasons on Fox, it finally happened.

In The Simpsons Movie, Springfield faces a pollution problem after the citizens sank the stage where Green Day played a concert due to the band talking about the enviroment, a subject that only Lisa Simpson (Smith) would consider as a big deal. At the memorial service for the band, Grampa Simpson has a prophetic vision in which he predicts Springfield’s doom, but only Marge (Kavner) takes it seriously.

Meanwhile, Homer (Castellaneta) saves a pig from getting killed at Krusty Burger, dubbing it Spider-Pig and loving the pig more than his son Bart (Cartwright), who resorts to viewing Ned Flanders as a potential father figure. Homer stores the pig’s feces in a overflowing silo, which Homer is instructed to dispose at his wife’s orders. But Homer screws up big time and dumped the silo into the lake, worsening things for the city. Russ Cargill (Brooks), the EPA’s villainous boss, gets the USA president to put a large glass dome over Springfield to prevent evacuation. However, the Simpsons managed to escape and flee to Alaska to start a new life. The new life seems good at first, but plans change once they learn through a tv commercial that Springfield is going to be destroyed in order to create a new Grand Canyon. So it’s up to the Simpsons family to save Springfield before it’s too late.

“I can’t believe we’re paying to see something we get on TV for free! If you ask me, everybody in this theater is a giant sucker! Especially you!”

Structure-wise, The Simpsons Movie is pretty much like an extended episode from the tv series. There’s a few criminal ommisions from minor characters in the film (Sideshow Bob and Marge’s relatives, to cite a few) and others are making cameo appearances for the most part, except for Ned Flanders since he’s important to Bart’s storyline. New characters are created such as Russ Cargill and Colin (MacNeille), the latter serving as a love interest for Lisa in the film. Cameos includes Green Day and Tom Hanks. Some of the jokes used in the film might seem familiar and by the time you get to the Spider-Pig song, it’s not as funny as when you’ve listened to it the first time on the trailers for the film.

However, there’s guaranteed laughter in the film, the animation looks slicker, there’s some touching moments like Marge’s message to Homer recorded on their wedding tape, the main characters still conserve some of the characteristics that made them popular, and there’s potshots against the likes of Disney and other films. As a whole, The Simpsons Movie is actually entertaining and proves why the tv series is still going on. But despite my enjoyment of the film, this could have had a bigger impact if the movie was done back in 1997 or if it signaled the end of the running tv show.

P.S: I found this film more enjoyable in the Mexican-Spanish dub rather than in its original language.