All Dogs Go to Heaven 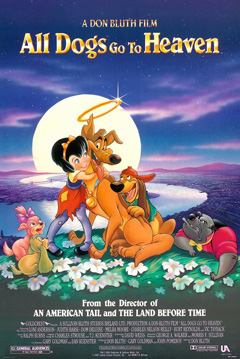 Can you believe Don Bluth’s All Dogs Go to Heaven is over 20 years now? Despite of how dated the animation style looks now, and the lack of catchy Disney-esque tunes, one of Don Bluth’s most popular classics — the other ones being An American Tail and The Land Before Time — is still entertaining in its mix of some very dark themes and kid-friendly vibe.

Bluth’s animation has always been just not for kids, and this is a prime example in which our hero, a crooked but friendly mixed-race dog Charlie (Reynolds), who has recently escaped from his death sentence thanks to his good pal Itchy (DeLuise), gets involved in devious gambling businesses against his backstabbing business partner Carface (Tayback).

In his trying to one-up Carface, after this one tries to get him killed, Charlie finds a little girl orphan named Anne-Marie (Barsi), who can speak to animals and can find out who will win the animal races. Charlie sees this as a good business opportunity and takes the girl away with promises of helping the poor, and helping Anne-Marie to find a new family.

We almost never get to see such shady characters in animation aimed at children, and I do remember my cousins and I enjoying the film back then. While back then, All Dogs Go to Heaven was a story of a talking dog, and there was a singing crocodile, now is a story of change. Charlie is a bad character — not truly evil like Carface — but had his own questionable behavior. Even the silly Itchy, who got itchy when he was nervous, had his jealous side and was willing to ditch little Anne-Marie when her being put both Charlie and him in danger.

The songs aren’t as recognizable in the pop culture scene like Disney staples like Hakuna Matata or Under the Sea, but You Can’t Keep a Good Dog Down seems to balance that mix of crookedness of the world Charlie lived in with his voice — it has a Cantina style that is definitely odd but highly contagious. The most hilarious, and slightly out of the blue, number is Let’s Make Music Together with the giant crocodile with the big painted lips — am I the only one thinking big Drag Queen in that number?

Overall, the film may not be an instant hit for the Pixar crowd, but All Dogs Go to Heaven brings forth nostalgia and still captures the attention of other people who are still growing up with these animated films. I checked, my 9-year-old niece saw me watching the film and asked me about it. Some kids these days, clearly I’m underestimating them.