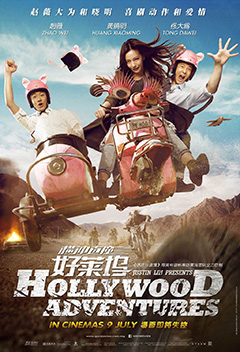 I’m starting to get a little bit worried that people will think that I have terrible taste in film whenever I write a neutral/slightly positive review on poorly received films– recent culprits: Accidental Love, Dolly ki Doli and Chappie.

Though the promotional material for Hollywood Adventure didn’t give much out, other than “wacky things happen,” by the final trailer I described it as “Entourage meets Chinese action comedy masala,” and it delivers that and much more. If Farah Khan is your kind of masala, this high-octane film-geek action comedy might just be your cup of cha.

Dump by his girlfriend, planning-obsessed Xiaoming (Huang) sets his eyes on Hollywood to get her back. Unable to get a regular ticket, he ends up buying an over-priced Hollywood Adventures tour where he meets Asian-permed FOB film geek Dawei (Tong), who are going to be taken care off by guide Weiwei (Zhao). Wacky things happen- shoot-outs, flying cars, explosions, happy cookies, Mandarin-English puns, and the breakdown of the Hollywood dream.

For about half the film (or first 50min.), you’ll get to laugh your butt off, starting with Simon Helberg as an airport translator. For low-budget travelers, this is actually pretty close to what Hollywood looks like- Hotel Five Stars Motel and -literally- none of the glamour that’s sold; a perception we’ll have to face with environmentalist superstar Gary Buesheimer (Coiro).

The story loses steam because, like Aiyyaa, it’s impossible to keep up the level of over-the-top humor in favor of getting the story moving forward. How can you top a snake barbecue Chinese-dance hoedown with bearded bikers? Or a drug-induced daydream featuring Robert Patrick’s T-1000, Kat Dennings and a talking pig?

Though Huang Xiaoming and Zhao Wei are the biggest names, it’s probably Tong Dawei taking the MVP title as the Randy Meeks meets Bruce Wayne of the group, who even got to kick ass in drag. I’m almost surprised there wasn’t a Chinese undercover operation there somewhere.

Also- YAY! Zhao Wei is no damsel in distress!

P.S: Dennings gets her best line in an in-between credits scene.