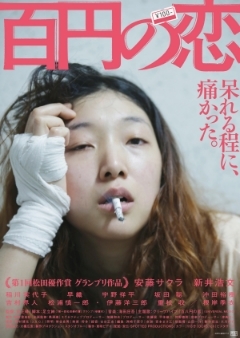 Gone are the days when, at least in movies, slackers were primarily lovable misfits trying to find their way through high school or college. Perhaps it reflects society in general, but more and more we’ve seen onscreen people well into their twenties and thirties who exhibit many of the same apathetic personality traits and characteristics. In Japan, more specifically, the “lost generation,” born out of the country’s post-bubble malaise, has received its share of cinematic portraits, with the dry comedies of Yamashita Nobuhiro arguably serving as the standard-bearer of sorts.

The passive-aggressive protagonist of Take Masaharu’s engaging comedy-drama, 100 Yen Love (Hyakuen no koi), wouldn’t look out of place in a Yamashita film; in fact, she could be seen as an older, and considerably more hopeless, version of the titular character in Tamako in Moratorium.  A 32-year-old with no job, boyfriend or general prospects, Ichiko still lives at home and spends much more time playing video games and eating junk food than she does helping out her sympathetic parents with their take-out business. Her newly divorced sister, who’s moved back home, is considerably less tolerant of her, and a highly physical confrontation between them leads to Ichiko finally moving out of the house.

The title derives partly from the local ¥100 shop (essentially a dollar store) where Ichiko starts working as a cashier, and partly, it is safe to say, from the bond she develops with a regular customer (Arai), a taciturn boxer nicknamed “Banana Man” for his eating habits by her (broadly sketched) coworkers. Unbeknownst to him, he eventually ends up serving as the last straw for Ichiko to bring herself together and channel her long-simmering frustrations and anger into something productive—which turns out to be boxing. Except that she’s at an age when women tend to retire from the sport, not start pursuing it. Mr. Take, a Zainichi Korean [1], may not be familiar with the 2014 biopic on Indian boxer Mary Kom, but he appears to have seen Million Dollar Baby, in which a woman also has to overcome age-related biases.

He is certainly fortunate to have an actor who’s just as committed as Hilary Swank was in the Eastwood movie. The unconventional and prodigiously talented Sakura Ando, the Greta Gerwig of Japanese independent cinema, is fierce, tender and occasionally funny in a highly physical performance. It’s a challenging role due to not only the physical demands of the character in the later stages but also given its overall arc and the amount of both inner and outer transformation required. Ando, who belongs to a filmmaking family—she recently worked in her actor-director father Okuda Eiji’s Case of Kyoko, Case of Shûichi and in her sister Momoko Ando’s 0.5mm—makes you believe in it all the way through, even when the contours of the story seem rather familiar.

Although it would be a stretch to call 100 Yen Love a “boxing movie,” it does partake in many of the narrative and cinematic conventions associated with the sub-genre: training montage, slow motion, the use of boxing ring as metaphor for life, the big bout at the end. Mr. Take’s employment of such devices isn’t devoid of irony, however. His camerawork is often just as intimate and nervy outside the ring as it is inside, helping capture the protagonist’s inner sense of anxiety and dislocation. For all her warts and foibles, this slacker is well worth the effort.