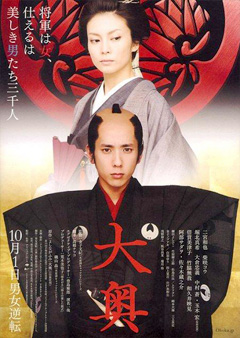 Based on the on-going manga series by Fumi Yoshinaga, distributed in English by Viz Media as Ooku: The Inner Chambers, Ohoku tells the story of an Edo period alternate universe Japan, in which the male population is stricken by a bizarre disease, which shifts the ratio of men to women to 1:4, turning society upside down and giving the most powerful position in society to a female Shogun.

I’m not going to lie to you, the idea of role inversion in a period piece is really an exciting one, and I’m not the only one thinking this since the manga series Ohoku is adapted from has won many awards in Japan. Plus, the idea of Kou Shibasaki as a female Shogun excites me beyond belief~

The main issue with this, however, is that the film should be called The Men and the Lady Shogun — at least — considering most of the story revolves around the men in the Shogun’s inner chambers (known as Ooku), and little about the female Shogun.

After a very blink-and-you-will-miss-it moment at the very beginning, the first half of the film is entirely dedicated to Mizuno (Ninomiya), who is developed as the good guy… so self-sacrificing that he sleeps with all the women without getting paid, giving out his seed to those women who are desperate to conceive and bare a child. Mizuno is painted as such a Marty Stu… a skilled kendo dueler, good son, a man through and through — in a setting that lends itself for some soft boy-on-boy action — and understanding.

Mizuno’s got a girl, his longtime friend Onobu (Horikita), who despite the gender reversal, still acts like a girl, bothering to make rice balls so Mizuno can eat them, and waiting for him to make a move… when, in fact, if the disease had been around long enough, should have been sufficient time to give role reversal in how the family seeks new blood. You wouldn’t wait for your daughter to get a suitor, you would require your daughter to find a suitable male.

The most interesting scenes dealing with all the male cast are Mizuno’s relation to Sugishita (Sadao Abe), who was the first one lending a helping hand as Mizuno entered the Ooku, and explained how his life never amounted to anything. There were also some machinations between the men just to get ahead, which would have been interesting if there had been more focus on them.

However, the most interesting aspect, which is sadly under-explored, is female Shogun Yoshimune Tokugawa (Shibasaki), who reaches power and begins cutting down unnecessary spending to lead her country back on track. What does her ruling do to deal with the disease crisis? How does the high society work with the gender inversion? We see women in town working, we see the men who have become prostitutes, we see the women howling at men posing in display windows… but what is it like for the female Shogun?

While Shibasaki commands attention when she’s on screen, and orders people around like it’s nobody’s business, Kazunari Ninomiya seems… miscast. He’s short and everyone seems to tower over him, he’s scrawnier than your average ikemen (beautiful, generally delicate men) in a room full of those.

Though the ending is a little too practical, it leaves it open enough to make a second part that could focus on the reconstruction aspect of society — if the manga deals with that.