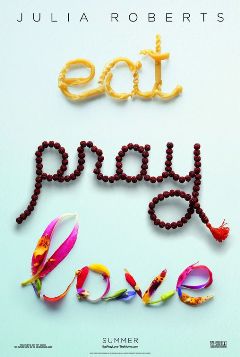 As far as Ryan Murphy’s television career is concerned, he’s a man of success. As a film director, however, that’s another story.

Eat Pray Love, the film adaptation of Elizabeth Gilbert’s novel, marks Murphy’s second attempt as a film director and stars Julia Roberts as Elizabeth Gilbert, a woman who despite being well-off in life — she has a loving husband (Crudup), a great career, and a weekend home — decides to take a year off — after landing a nice book deal — to travel around the world and search for what she really wanted in life.

The film’s title comes into play as she discovers the pleasure of eating in Italy, prays and tries to find spirituality in India, and her journey ends in Indonesia where she finds love.

This shouldn’t be surprising considering his TV stuff, but Ryan Murphy provides the film with great visuals and scenery. As far as the “food aspect” of Eat Pray Love goes, the Italian food looked delicious and made me feel hungry while Liz stayed in Rome. Most notably, there’s a great scene involving Liz and her Italian friend Sofi (Novotny) eating pizza which leads to Liz talking about her relationship with pizzas.

I wish I could say more good things, but unfortunately, the film version of Liz’s soul-healing journey is not only boring, but Liz comes across as a shallow, selfish, and boring bitch when the film tackled her romantic relationships, making it really hard to root for Liz despite being played by the likeable Julia Roberts, who was okay at best given the material she has to work with.

First, Liz divorces her husband because she really didn’t love him. That’s okay because divorces like that happen. But the way Liz treats every love interest is unsettling — I felt bad for all the guys who ended up falling for Liz because all of them were nice guys to her and deserved better than her. After her divorce Liz has a rebound relationship with David (Franco), but that ended just like her marriage. Next, she meets Richard (Jenkins), a man struggling to forgive himself for an alcoholic past, who takes her under his wing and helps her out despite her protests. Finally, she ends up with Felipe (Bardem), a sweet-natured Brazilian who provided her with warmth and love.

I haven’t read Gilbert’s book, but I wished that the film adaptation of Eat Pray Love made Liz’s journey more satisfying to watch and explain why she is so sad most of the time. I wouldn’t recommend anyone to watch this film, but if you do, eat something when you watch it for distraction, pray for it to end faster, and love Richard Jenkins’s performance, who brought out the best from Roberts in a otherwise weak film.