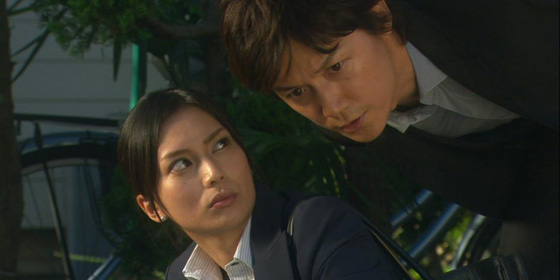 Galileo is a 2007 Japanese series of 10 episodes starring Masaharu Fukuyama and Kou Shibasaki, following Dr. Yukawa — a physicist obsessed with finding answers to the cases that rookie detective Utsumi thinks are impossible to solve.

What’s pretty awesome about this show is how they present the initial case that they will be dissecting with each witness account and clues. Finally Dr. Yukawa pieces it all together in a similar way that KEIZOKU 2: SPEC resolves its cases — Dr. Yukawa puts the final piece of the puzzle, makes a mess on anything he might be able to write on, we go inside his brain… and ta-da!

In theory, we should be complaining about this almost deus-ex-machina device. Dr. Yukawa knows everything, but it’s the way we, as an audience, speculate how they might solve the craziest things like spontaneous combustion, astral projection, poltergeists and premonitions, that make this show so much fun. Now, I’m not the most scientific of people, but explanations in the show seemed to make sense… and they might be fit for a session on Mythbusters!

Though, there is no on-going case that threads the ten episodes together, the show keeps it together with the evolving — odd and funny — relationship between the logic of Yukawa and the intuition (and often clumsiness) of Utsumi. Both Fukuyama and Shibasaki have great chemistry and play well against each other.

I have a feeling that Galileo would have taken advantage of a mystery that would develop throughout the duration of the whole show, because as it is right now, it’s very episodic.

You can catch Galileo (and its famous Episode 0) on Crunchyroll.