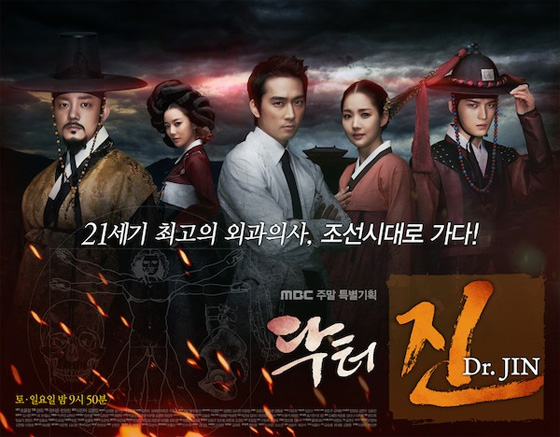 When I reviewed JIN early in the year, Julyssa mentioned that they were making a Korean re-adaptation with Jaejoong. Now, I’m not an avid watcher of Kdrama, mainly because I tend to feel they stretch storylines to fill their longer format, but I was really intrigued by how the historical aspects of JIN would fit into Korean history.

For those not in the know yet, Dr. Jin follows Jin Hyuk (Song Seung-Heon), a young and successful surgeon who ends up traveling back in time to the Joseon period in Korea after he finds a weird fetus-shaped humor inside a mysterious patient.

For a viewer of the original Japanese adaptation, the changes are stark. The poorest choice, personally, was switching the Miki/Nokaze bond, which created a romantic conflict of interest in the Japanese version. In Dr. Jin, actress Park Min-Young plays both Jin Hyuk’s girlfriend Yoo Mi-Na and Joseon medical assistant Hong Yong-Rae. It just… it banalizes the human aspect of Jin as a character when you simplify his relationships, who he should love and why.

The setup of the show also makes for important character changes, the Mi-Na/Yong-Rae character is a little bit too judgy and self-important, especially when — still in present day — she emotionally manipulates Jin Hyuk to perform a surgery he has already labeled impossible. When he doesn’t, she leaves in a huff and puts herself in danger, leaving us with the unsatisfying feeling of rolling our eyes at them.

Dr. Jin also suffers from pacing problems, sometimes rushing through scenes and others that drag and you’d wish they were over. However, things would be bearable if Dr. Jin had some emotional punch. Each episode, it leaves me cold. Though, I guess we could say that’s a problem of combining some of the political intrigue from JIN 2, which leaves less time to develop things emotionally.

The technical aspects of the show seem fine… wardrobe and make up — though people nowadays almost ALWAYS feel too modern for period stories. The acting is a little bland at times when scenes begin to feel stagnant, but it’s passable.

If you’ve seen the Japanese adaptation already, I suggest you skip this one, because it’s almost torture to watch. If you haven’t yet, you might find enough in the story to keep you watching — even more so if you’re a fan of anyone in the cast.

Otherwise, no. I can’t recommend this one.

You can watch Dr. Jin over at Viki.