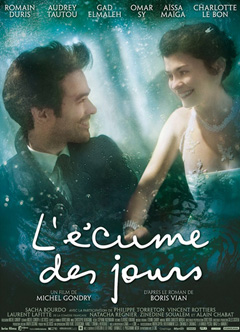 Michel Gondry does his own vision of Vian’s 1947 novel Froth on the Daydream, which had already been taken to the screen in the 60s and later — just a decade ago — by Japan at the hand of the magical lens of Noboru Shinoda in Chloe (2001) [1].

The basic premise of the story is about a man, Colin (Duris), who falls madly in love with a woman, Chloe (Tautou) who gets a rare water lily lung condition that needs to be treated merely by being surrounded by flowers. In Gondry’s vision, Mood Indigo turns out to be everything visual you would expect, so there’s little to lose if you’re a fan and interested in the project from that perspective. The story and feelings, however, get overshadowed by Gondry’s style of whimsical quirkiness.

Throughout the years of Gondry’s film career, the use of his characteristic style has been overwhelming his pictures — like Tim Burton, legasp! — taking a really low (or high) with The Science of Sleep which already had a good amount of special effects and projections used to create the universe. In it, it served to create the imaginary world of Garcia Bernal, in here, the universe of Mood Indigo overtakes everything swallowing every bit of despair that you might feel for Colin and Chloe. Romain Duris and Audrey Tautou are charming leads and fit perfectly in the world that was created specifically for this film, as do Gad Elmaleh as Colin’s friend Chick, Omar Sy as Colin’s manservant Nicolas, and Aissa Maiga as Nicolas’ cousin Alise. However, the king of the film seems to be The Mouse, played by Sacha Bourdo, who was included within this world as a projection in Colin’s place.

I haven’t read the book, but I doubt that the original source material was devoid of any feelings and filled merely with a sense of wonderment. It IS in theory the story of a man who marries a woman who dies a painful and long rare disease, and in the process loses all he’s known throughout his existence. But I felt nothing.

Mood Indigo isn’t horrible nor the amazing masterpiece that someone will tell you it is — as an adaptation, it works; it’s just solely Gondry’s.