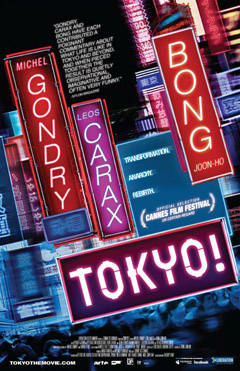 Generally speaking, the trilogy of stories that is the movie Tokyo! could have been much shorter and would have been more successful as 10 or 15-minute shorts rather than a single movie.

The first short by Michel Gondry was rather charming. It portrayed a girl (Ayako Fujitani) who felt useless and out of place in her first week in the big city. Initially, she seems to be a take charge woman carrying her artistic boyfriend (Ryo Kase). As her aspiring filmmaker boyfriend finds a menial job immediately to help make ends meet, she flounders in her efforts to find her niche.

As her alienation increases under the pressure of the burden she and her boyfriend place on their host, she undergoes a frightening transformation. Into a chair. Eventually she finds peace and purpose with her new life as a piece of furniture when a struggling musician finds and takes her home.

This was a pretty straightforward film that seemed to play in the vein of a children’s tale, and could have been shorter had it not dwelt so long on the girl’s drawn out transformation and her life as a chair.

Merde was much more layered and topical, though it didn’t necessarily add too much to today’s social dialogue on terrorism or the state of society.

Of note is how the use of Akira Ikufube’s music from the old 50s and 60s Godzilla movies, even the Godzilla roar itself, was integrated into this particular short. As a quick background, the Godzilla films were made as a veiled commentary of the use of atomic weapons on Japan. Of course, instead of the nuclear weapons wielding America, Godzilla, the atomic fire breathing monster, was substituted.

In the modern day usage of who this music now portrays, it is the horrendous sewer dwelling deformed man known as Merde. It is almost as if Merde is the manifestation of 21st century fears.

Three times terrorism is brought up by word or imagery. In Merde’s supreme act of terrorism against Tokyo, he is dressed in an old Japanese army uniform lobbing a cache of old World War II grenades. At his subsequent trial, the Japanese prosecutor states, “Even terrorists have the decency to blow themselves up with their victims.”

During Merde’s execution, someone is recording the event with their mobile camera the way Saddam Hussein’s
hanging was documented. Even hanging does not stop the menace, as he becomes as intangible as air, escaping through an air duct. He is unkillable, more of an idea than a physical being.

The third piece covered a very basic fact of urbanism. A lot of people are lonely. Period.

On the surface the story revolves around a shut-in (Teruyuki Kagawa), someone who withdraws from society and lives as completely as they can with minimal contact with the outside world. His isolated world is perfect, quiet and ordered. Easy to maintain and to control.

Once he makes eye contact with a pizza delivery girl (Yu Aoi), all hell breaks loose and they experience an earthquake. The pizza delivery girl passes out in the shut-in’s home and he’s forced to take action. Not knowing how to revive her, he notices tatooed buttons on the girl’s arms and leg. Pressing the reset button on her leg, she wakes up and goes off.

With this new outside factor and traumatic earthquake, this man’s world is never the same and he must seek the delivery girl for resolution. He wanders out into the world to find other shut-ins like himself. Eventually, he even finds the girl who is ready to become a shut-in herself. In beseeching her to come out, he presses a tatooed button that says “love”, and the story ends with another earthquake.

What was most interesting about this film was that it seemed the earthquake was a sign of how difficult it was to seek change, love, or human contact and to maintain that. It is so much easier to live and maintain a predictable life without accommodation for a shared life. Even the girl herself had her own particular way of dealing with and controlling her life through her tattooed buttons, which indicated which emotional state could be activated.

This film dwelt far too long on how sunlight traveled across a floor and other esoteric thoughts.

While urban alienation and adaptation is the common thread of this trilogy, each story unto itself explored themes so specific to those segments as to make each of them unrelated to the other. This made for a mentally taxing experience where one had to reset their mind for the next film.

Even as much work as that was, once one has deciphered the layered and metaphoric visuals, you’re left a bit hungry. At first, one is self congratulatory for having understood a foreign/independent film, but in hindsight, what did I walk away with? Did it spawn a conversation for at least a couple of hours after? This one didn’t for me. I really had nothing to relate to, save for a dissection of what each audio or visual metaphor meant.