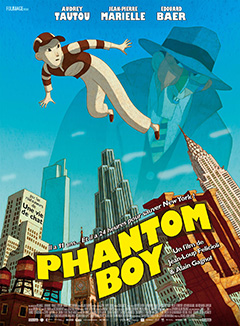 The commercial market for American animation is so homogeneous nowadays that critics get excited when they find a 2D animated film that doesn’t stick to the norms. The director duo Jean-Loup Felicioli and Alain Gagnol are back, after their Oscar-nominated animated feature length debut of A Cat in Paris with another fun crime mystery.

The Phantom Boy follows the life of a boy named Leo (Ridremont), who is going through cancer treatment, but never fails to daydream about superhero stories with his little sister Titi [cherry~ zing!] (Gaspard Gagnol). One day he discovers that when he lays still closing his eyes, he can astral project, freely to float around New York.

When a mysterious man with a disfigured face (Marielle) threatens to take over the city, bad-luck detective Tanguy (Baer) and overconfident reporter Mary (Tautou) end up on his trail with the help of “the phantom boy.”

Gagnol inspired by the superheroes of American comics, especially done by everyone’s fave Stan Lee, uses a boy with the ability to fly and go through walls, floors and ceilings; with just one weakness— he can’t do it for long, for he risks fading away. This is the film’s strongest element yet remains unexplored despite managing to reach the point of no-return. I had a similar issue with Felicioli and Gagnol’s previous, in which the ending seemed forced to be a happy one. In that sense, Phantom Boy resembles it in quality; both start off in the Saul Bassesque title sequences, have their unique visual styles, there are bad guys with comical goons, and both end well.

There is a scene that may be questionable for some adults that intend to watch this with their children, in which Leo following Tanguy’s request to follow Mary ends up at a strip club. Nothing is seen, but it’s a super awkward random scene. See, Tanguy asks him to cover his eyes, but Leo is beginning to be see-through.

An Academy Award nomination would be unlikely because the animation field is much more competitive than a couple of years ago. Finding Dory and Zootopia are sure to land a spot, while Kubo and the Two Strings is also a likely candidate, leaving only two spots left. The Red Turtle, April and the Extraordinary World, and possibly Miss Hokusai and The Little Prince are all vying depending on US release dates.

You can check GKIDS cities and dates for Phantom Boy on their website. It just opened in New York, it opens in Los Angeles next week (22Jul), and expands to more cities in California, as well as Vancouver and Toronto the next (29Jul).