Caught in the Web 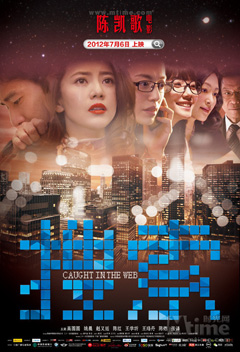 We live in a world connected each and every hour of the day, where every single thing you do — despite not being a public person — could end up online with the potential of becoming a viral video if what you’ve done is outrageous enough. Given that we’ve become so judgmental of one another despite not being privy to 100% of the information, social nightmares are created and lives can be destroyed- that’s the latest theme of Chen Kaige’s latest, who has been staggering after the wildly acclaimed Farewell My Concubine.

After being diagnosed with advanced lymphatic cancer, beautiful hard-working Ye Lanqiu (Gao) is caught in the nightmarish bus that will ruin hers and the lives of everyone that’s around her when she refuses to give her seat to an elder and is caught on camera. Public outrage ensues after this airs under the name of journalist Chen Ruoxi (Yao), who obtained the footage after her sister-in-law, Yang Jiaqi (Wang L.D), was caught in the bus with her brother Shoucheng (Chao), who ends up aiding Ye Lanqiu emotionally as her reputation is tarnished even at work where she’s branded as a scarlet woman by Mo Xiaoyu (Chen H), the wife of her boss, Shen Liushu (Wang X.Q).

I won’t lie to you, the idea of Caught in the Web is VERY interesting as a social study — the setting of China is just icing on the cake — however, by giving Ye Lanqiu the backstory of being terminally ill… even if I didn’t get “terminally ill” while watching the film, seems to undermine the possibilities of studying people by letting the audience easily judge these people. Would I feel bad about what happened to Ye Lanqiu if she weren’t sick? Would I have felt anything if Chen Ruoxi hadn’t been a journalist looking for a big story? Should I feel sympathetic towards Mo Xiaoyu if she hadn’t been kind of a bitch? To say that I felt manipulated seems like an understatement.

The acting is strong, of course, particularly by both female leads Gao Yuanyuan and Yao Chen, but it seems the strength of their characters is undermined by the somewhat heroic nature of the only male characters in the story. First, there’s Shen Liushu who is played almost like a father figure to the company Ye Lanqiu works for, who gets painted by a stroke of gray by the second half of the film and starts playing the game of deceit that Caught in the Web had been weaving. Then there’s Yang Shoucheng as the White Knight in Shining Armor. The empty vessel, prototype of the everyday man who struggles to make ends meet and who dreams big enough for a decent life, who enters “the web” and lends his support to the vulnerable Ye Lanqiu. It seems he’s doing it for the money, but we all know he’s a good person. In a film filled with faulty women — who destroy lives, lie, backstab you and make REALLY stupid choices — there’s an altruistic man who is not a power executive, but an ordinary one with debts. Please.

Now, if only Ye Lanqiu had been clear-headed enough to tell her boss “Hey, boss. I’m dying. I’m sorry I’m not giving you my two-week notice. But I wonder if I could get a couple hundred thousand Yuan to live my last days.”