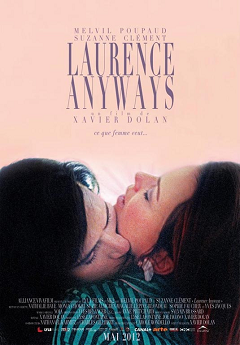 Misrepresentation of trans identity in cinema is one of the worst out of the entire LGBT community, and filmmakers who truly care about their trans characters are difficult to find. In comes Xavier Dolan with Laurence Anyways, a refreshing but rough look at what one person and their partner go through on their journey to embracing the woman they’ve always known they were.

Laurence Alia (Poupaud) has been living as a man for thirty five years. It proves to be a lie that she can no longer live with, and she begins to reveal her longing to be acknowledged as a woman to those closest to her. The film chronicles ten years in Laurence’s life, focusing on her womanhood and the relationship between her and Fred (Clement), the woman she loves.

Xavier Dolan is progressing as a director with each and every film, but he still seems to find himself falling into the same missteps seen in his previous films. He clearly cares a lot about visual storytelling, and likely has dreams of being the next Pedro Almodovar, but in an almost three hour film, there are far too many scenes cut in that feel like the music video moments from I Killed My Mother and Heartbeats. The camerawork fights with itself, gorgeous and static one moment, then messy and handheld the next.

Things start getting a little too eccentric and unfocused at about the halfway point, when Dolan draws attention away from Laurence and her relationship by adding in unnecessary scenes and characters. Considering that this couple and the trials they endure over the years is the film’s driving force, it’s a shame to see it digress from it so often. Most of the dialogue is very solid though, and while some bits are far too contemporary for the film’s period, they still prove to be useful for character development.

In addition to the relationship between Laurence and Fred, Laurence Anyways offers a much better depiction of the relationship between mother and child than I Killed My Mother did. It’s impossible to imagine what a parent goes through when learning that the child she’s known as a son would like to be known as a woman, but their interactions will surely feel familiar to those who have come out and dealt with the initial confusion and resentment, only to be accepted and loved no matter what. These scenes that focus on struggling relationships one can emotionally relate to and are what helps the film rise above all those aforementioned flaws.

There’s a certain confidence to Laurence when she chooses to strut through the halls of her school in women’s clothing, even when dealing with overwhelming insecurities and the expected judgmental glances, and Melvil Poupaud knows just how to express this in his acting. Suzanne Clement’s work is just as impressive as his, and their interactions are amazing to watch, even when the scenes aren’t all that well scripted. With all its ups and downs, Clement and Poupaud really make you believe that this truly beautiful relationship is real.

Even with all its eccentricities and faults, Xavier Dolan’s latest film actually cares about its characters and that’s something to genuinely be thankful for when the lead is a trans woman. Had it been a little more concise and clean-cut, Laurence Anyways could have been magnificent, but it’s still a film that’s definitely worth checking out.