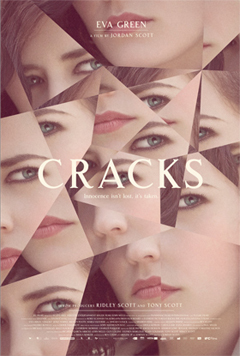 Jordan Scott, daughter of director Ridley Scott,  directs her first feature-length film and does quite well with it. Bringing Sheila Kohler’s novel to the big screen, Cracks shows us just how important desire can be to desperate and isolated young women.

The film begins by presenting us a traditional London boarding school for girls, and does this with an exquisite aesthetic feel – costuming, scenery, and acting all providing just the right mood for this dark, sensual drama. With a slow start, we are introduced to the charismatic young teacher, Miss G (Green), who frequently tells of her adventures and serves as a role model to her students and swim team. The girls (Poots, Nun, McCann, Carroll, Dugdale) are led by their team captain Di (Temple), who seems to be fixated on their teacher.

It isn’t until the arrival of a new Spanish student named Fiamma (Valverde), that things begin to change. Miss G turns her eyes onto the young Fiamma with desire and Di’s jealousy is fueled day by day, longing for the favor of her teacher over her fellow pupil, who seems uninterested with the woman and finds faults in the stories she tells her students. The relationships between the girls and their teacher unravel slowly but surely as they become consumed in their jealousy, passions, and desires.

The film unfortunately does take some time to build up, with a fair amount of scenes featuring the girls daily events and plenty of squabbling over Miss G’s attention. Nonetheless, Jordan Scott’s film closes with an excellent final act, in which the ominous tones the likes of Lord of the Flies can be seen. Cracks is a film that takes what once seemed innocent and reveals the dark nature surrounding it. If this film is any indication of Jordan Scott’s future career, it is easy to say that she will be making more impressive films in the time to come.