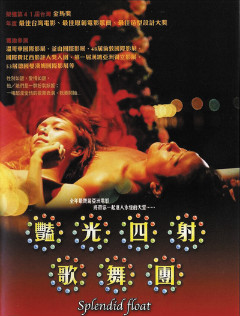 Zero Chou is one of the few known openly lesbian directors in Asia and Taiwan. She began her filmmaking career doing documentaries that have now bled into fiction.

Splendid Float is one of the three films she’s done — the others being Spider Lilies and Drifting Flowers — that deal with LGBT themes.

The story follows Roy (Chen), a taoist priest that works at the traditional family burial business by day and becomes a drag queen performer by night, when he gets together with the gang all dressed up to sing. One day, Roy — dressed up as Rose — meets Sunny, a chilled surfer type of guy who runs into the group when their vehicle catches fire.

There might be a problem with the running time, but it does seem like we never see enough of Sunny and Rose to ever feel as connected to them — we don’t even know them much personally, except for Roy’s family, which, granted, gives us a really funny moment where Roy’s dad wonders whether Roy is gay because he is so feminine, to which mom responds (old man makeup and all) whether she looks masculine. We spend so little time with Sunny and Roy as a couple that we never see the connection break when Sunny leaves Roy with a letter and a yellow rose, to later be found drowned at sea.

We spend the rest of the film seeing Roy, trying to hide Rose, mourning Sunny’s death and trying to get his soul back from… whatever he may be going. Roy is unable to let go, so much so that when he’s asking Sunny’s spirit whether he wanted to go with him in the after life, the spirit replied — according to superstition — “no” twice, while answering “yes” when he’s asked whether or not he wanted to leave Roy — but of course, Roy takes that as a “yes, I want to go with you.”

I don’t know whether gay men would love the film, as it portrays most of the gay men as really effeminate guys — but they are all drag queens, so maybe that’s the logic of the film, even if not all drag queens are queens all the time.

The film would have fared better with an extra 20 minutes to develop the connection between Rose and Sunny, or by cutting the last 20 minutes of the film — Rose not  being able to let go of Sunny becomes a bit redundant. For a better developed film between two men in which the ghost of a lover haunts the one left behind, check Contracorriente.