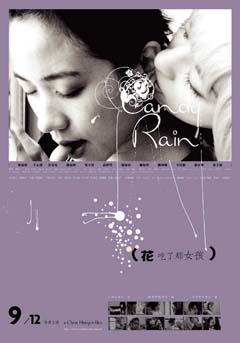 As far as LGBT or lesbian-themed films go, Candy Rain is a collection of short pieces that revolve around a group of Taiwanese women who happened to be attracted to women. Neither of the stories deal specifically with the coming out process, important times in our lifespan, or deals with social order. It’s a slow personal drama that lacks that high drama that general audiences have come to expect from other LGBT films such as Boys Don’t Cry or Milk — in that sense, Candy Rain is not poignant, but that doesn’t take away its merits.

In the first story, Grace Chen and Belle Hsin play a couple of friends who happen to be in love, they sleep together, have fun together… shower together, but as one of them seems to be the sole provider of the relationship, tensions rise, and what looked like a smooth ride… isn’t.

In the second story, Sandrine Pinna plays an odd chef with a severe case of OCD, as she waits for the perfect love on an online dating site, where she meets Waa Wei as a very upfront woman trying to get some.

The third story tells the story of long-time friends played by butch Niki Wu and I-Ling Kao, as they set out to wait for each other — like China waited for the return of Hong Kong — until Kao’s character fulfills her role as a daughter, gets married and forms a family.

The first three stories are carefully crafted with a slow pace, loads of silences, and a lot of moments when you go “oh, so what may she be thinking of.” The performances are great, especially by Sandrine Pinna who ended up playing another character attracted to women in Miao Miao. She plays her character U as boyish, wide-eyed, and very focused on the little details in her life. Her ticks and the way she responds to Wei’s aggressive passes, it’s kind of hilarious and unsettling at the same time. [MV]

All three of these stories have this gloomy stylish quality to it — understandable given the director’s background in music videos, and it’s even more painful in the third story. There’s a scene which Wu shares with Kao’s on-screen sister where she tells Wu this was the first time seeing her sister truly smiling. The scene is a simple quiet moment between a person that didn’t understand why her sister would choose being with someone, finally realizing the reason why.

However, the third story ends up in an awkward position, giving way to the fourth segment… which doesn’t fit the general feeling of the other stories, making the audience completely disconnected by the end of the whole film.

In the fourth story, Karena Lam is cast as a player-player who likes to get together with cute women — her girlfriends and exes are played by Wang, Hsu and Lu — that in the end always are violent. Lam’s character then comically gets hit in slow motion, in different ways and angles, as she makes faces with fake blood on her nose. Her character comes up with the theory that there are two types of people… sadist and masochists.

The comedic tones in the final segment doesn’t make it impossible to end in a sad tone, which ultimately leaves us thinking about what we’ve watched and why we’ve watched it. Other than a mysteriously undelivered package, there’s nothing stronger holding the piece together, which is a shame because some of the stories are worth watching.