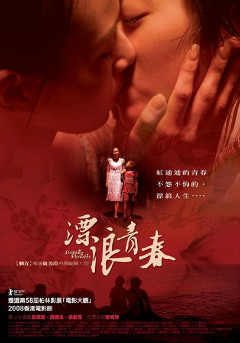 Drifting Flowers is a compilation of three different stories that entwine within the narrative to create one sole film. It begins with the story of Jing (Fang), a blind local bar singer, and her little sister May (Pai), who meets Jing’s new accordionist butch Diego (Chao). Diego is so cool and friendly that little May falls in love with her, creating tension with her eldest sister who is in a relationship with Diego.

The story later crosses over to a wedding dinner where a young Lily and Yen are getting fake-married to hide their relationships from their families. In a weird turn of the space-time continuum, we see Lily and Yen grow old, Lily with a clearly onset of Alzheimer and Yen with a HIV-positive diagnosis. Back together now that both have no one to turn to.

Finally, we see Diego’s backstory, which also seems to belong to that weird space-time wormhole because she also meets someone named Lily.

I have to admit, however, that despite this who’s who and when is the story set — I really quite liked the story. I don’t think it completely works as a whole, but it does as individual pieces. The one that works best is the first part involving the sisters because sisters have complicated relationships. We have already dealt with girls having crushes on their mom/older sister’s special friends in shorts like I’m Jin-Young, but it’s even more dramatic on this segment because there is a point in which May actually — without thinking much, but still having some intention — puts her older sister in harm’s way.

Diego’s own storyline gets its own set of drama, when her own brother is putting obstacles in her life. Plus, it gives butch visibility, in which they deal with things such as family inheritance, but also small things like breast-binding, and public washroom usage.

The second segment which deals with the old not-a-couple is quite devastating and difficult to watch because it’s so heavy-handed. It’s not only that Yen (Wang) has HIV, and that his boyfriend’s off with someone else, but combined with Lily’s (Lu) Alzheimer’s diagnosis is just almost too painful to take in.