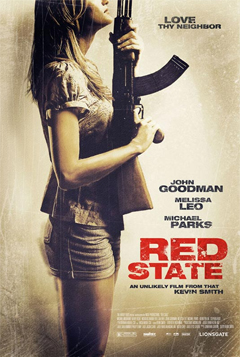 The sheer amount of controversy surrounding Kevin Smith’s latest film makes it something that many will be curious about. But Red State is much more than the independent horror film that many make it out to be. I might start by mentioning that one should not walk into this expecting a straight horror, but instead, a mixture of genres — heavy on the action, suspense, and drama. It’s ambitious, it’s mature, and it’s a fucking impressive new leap for Kevin Smith.

Red State begins by introducing us to three teens who are looking to get laid, specifically by an older woman they found online. The boys arrive at her trailer at night, where they quickly down the drugged beers provided to them and pass out half-naked. Soon enough, they awaken to find themselves kidnapped by a violent group of fundamentalists — prepared to punish them for their mortal sins. When a local deputy approaches the church to investigate a minor car accident that the boys were involved in, things erupt into a full out war between the cult and the law.

However much I enjoy Kevin Smith’s direction, I tend to like his writing even more. Let’s face it: the man knows how to create some fantastic dialogue, as well as some creative stories, and the screenplay for Red State is no exception. We’ve seen him tackle drama before in Chasing Amy and religion in Dogma, but this is a whole new realm when it comes to Smith. While many have complained that the “plot” was thin and not well-executed, I thought quite the opposite. Yes it’s a simple plot, but that does not take away from the film at all. It opens it up to keep you focused on the dialogue and performances — the true shining light of the film.

However impressive Smith’s dialogue might be, it wouldn’t have been as successful if not placed in the hands of a cast like this one. I say without hesitation that the performances from this cast contribute a great amount to making Red State as excellent as it is. The best performance in this film comes from the stunning Michael Parks. His delivery of hate speech and religious sermons makes for one of the most fascinating portrayals of a preacher completely driven by his beliefs that I’ve ever seen. Thankfully, both John Goodman and Melissa Leo have no trouble with their equally impressive roles. Melissa Leo manages to harness the sheer brutality of the events at hand and bring them forth in a character that is as devoted to her God as she is deranged in her deeds. Goodman is a man of the law who seems to be the most level-headed character, and also happens to deliver one of the most powerful lines of the film:

From judgmental critics to die-hard Smith fans, many have barraged Red State for not being enough of a genre film, and for not taking a side and distinguishing a villain and a hero. This is actually what I found to be the most fascinating aspect of the film. Kevin Smith handles the topic of belief in every person — regardless of their religion, or lack of it — in an interesting way by not taking a side in this small war. It reminds us that there is no fine line between good and evil, and that a simple belief can spark a hatred between people that knows no bounds.

Although Red State has been the subject of negative reviews, it is something that has the opportunity to leave many as captivated and impressed as I was. It might not be for everyone, but it certainly proves a great addition to Smith’s filmography.