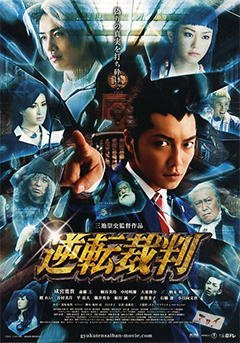 Given past films as evidence for the quality of video game adaptations, the average moviegoer could assume that they’re all essentially trash. “OBJECTION!” Takashi Miike yells, a copy of his impressive film Ace Attorney in hand to present to critics and fans everywhere with a much needed defense of game adaptations.

Based on the popular Capcom game of the same name, Ace Attorney follows up-and-coming defense attorney Phoenix Wright (Narimiya), who works at a law firm run by his friend and mentor Mia Fey (Dan). When Mia is murdered and only her younger sister Maya (Kiritani) is found at the crime scene, Wright is launched into a series of connected murder trials that will make or break his career, as well as the lives of his friends and rivals.

One of the things that makes Miike’s latest such an appealing film is the sheer number of genres that he blended together in order to create it. Crime, comedy, mystery, and even sci-fi — all of which he’s previously tackled — are tossed into a courtroom drama the likes of which few have ever seen. Known for his more violent efforts –– Audition and Ichi the Killer — Miike’s work here could be seen as one of his most tame pieces, something that can be seen as silly and light-hearted entertainment regardless of its dramatic moments.

Calling this an on-screen clone of the game wouldn’t be quite right, but Ace Attorney comes pretty damn close. The angles used to shoot plenty of scenes within the courtroom, especially in the cross-examinations of witnesses and all of those objections that Phoenix Wright makes, are so precise that they look like live-action copies of certain frames of the game. The large screens presenting evidence in court provide a new and creative addition to the film in the near-future scenario it presents, and the visual effects used for them are quite good.

Takeharu Sakurai and Yukiko Oguchi do a fine job of taking bits and pieces from each of the four cases in the game to throw together a solid film just over two hours. Unlike other writers of game-based films who “reimagine” high-quality writing into something messy and different, the two chose to stick to some of the stories already written for the game with a few liberties. In sticking to the game so much, there are a few faults, most importantly the excess of investigation scenes which is just as much of a problem on film as in game. There are also certain things that seem randomly inserted for those unfamiliar, such as the inclusion of the police department mascot Blue Badger, but there isn’t much that will leave people feeling confused.

All the actors do well at matching their characters to their in-game personalities, but none really do nearly as well as Hiroki Narimiya in the role of Phoenix Wright. In facial expressions and comedic timing, Narimiya nails the role and creates a likeable character that drives the film. Of the supporting cast, Takumi Saito’s work as the prosecutor Miles Edgeworth and Ryo Ishibashi as Edgeworth’s mentor, an undefeated prosecutor stand out the most. Both men have worked with Takashi Miike previously — Saito in his 13 Assassins remake, and Ishibashi in the masterful Audition — so it’s no surprise that they deliver here.

While not a perfect film, Ace Attorney ranks high and above every other adaptation of a video game. It serves beautifully as a stand-alone flick, and Takashi Miike’s skill at capturing the essence of the Phoenix Wright games while maintaining his own style is an impressive thing to watch.