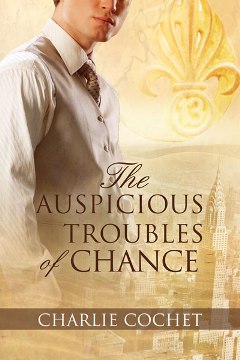 Life, whether we like it our not, tends to always teach us about our shortcomings, picking at the scabs from our past until they’re left fully exposed. Chance is the type of student that struggles to learn his lesson, constantly being thrown up against a wall and swallowing the pain until his throat is sore and his spirit completely numb.

Chance has lived his life wandering around in a seething state of self-loathing anger. Abandoned as a child in the seedy pre-Depression backdrop of the debauchery and lace of the 1920s, he’s always had to prove his ability to hold his own no matter who dares step in his path. At the ripe, bold age of eight, he runs into a woman whom he can only classify as an angel, the big boss of a Broadway sanctuary named Marie. Living in the backstage glitz and intrigue of Broadway, he meets the first human being, a beautiful chorus boy named Arthur, who plants that unquenchable itch of love in his skin. But just when his heart is finally open enough to accept love, a fire burns away his only family… and his last lingering faith in humanity.

From love to loss to a lashing tongue of vitriol whipped towards anyone who’d so much as speak to him, Chance finds himself in a special battalion in the French Foreign Legion — a mismatch group of kids lumped together because they were considered miscreants, too unstable to serve with “normal” soldiers. Their leader, the legendary Commandant Vaillant, has a reputation for whipping his boys into astonishing shape. However, Chance’s first encounter with the heralded Commander yields more than just a passing interest in the man’s bravado.

Through the course of their time spent in the African desert, Chance and the Commander, a beaming ray of light named Jacky, find there’s an undeniable synergy vibrating with vigor and meaning between them. Chance does all he can to ward off the familiar tingle of something warm under his skin, a feeling that Arthur first singed into his being. Yet the harder he fights, the more Jacky wants to show him that there is love and honesty in the world. Jacky tries his best to breach Chance’s albatross. When he finally manages to, Chance’s stubbornness and the irony of fate threaten to once again take away the beauty right in front of him.

Charlie Cochet’s debut effort is bold, intelligent. It’s of the caliber that bodes well for a brilliant career. From the moment the story begins, you get a precise sense of the distinctive voice of our character, and by extension the breadth of voice of the writer. Cochet’s use of language and diction makes the simple image of touch grand, audacious. Chance and Jacky’s relationship is so palpable, even the very breath between their bodies expands and reaches out to embrace the reader in its indigo hue.

The Auspicious Troubles of Chance teaches the reader something about the unshakable grandeur of true love: no balm is more powerful than the soothing touch of someone who’s willing to take all your battle scars, all your insecurities, and your frailties and allow you to love yourself. Cochet and her characters give the reader hope and the belief that through all their imperfections, there is something truly beautiful even in the cracks of a bruised and neglected soul.

Purchase The Auspicious Troubles of Chance at Dreamspinner Press.