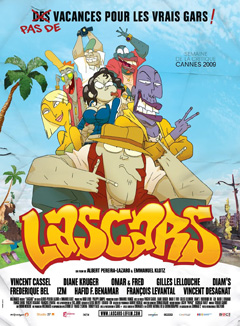 Feature film of the 1998 French animated series Les Lascars, the film follows Tony Merguez — translated to “Tony Sausage” in the subtitles — (voiced by Cassel), a petty pseudo gangsta who just wants to have a good time with his good pal Jose (IZM) in Santo Rico, until he gets duped into buying plane tickets he can’t use.

Tony decides to “move some products” from bad boy Zoran (Lellouche) to get money for new tickets to escape his psycho-nymphomaniac girl Manuella (Bel), as his pal Jose (not wanting to do anything with Zoran) takes on a job to build a Norwegian sauna for judge Merciless, to impress his preppy daughter Clemence (Kruger).

There is actually something really quite fresh about an animated film like Lascars. Maybe it’s the politically incorrect and crude humor, or maybe it’s just that awkward pseudo retro animation — I find the combination hilarious — but whether you like the hip-hop/rap subculture (from France) complete with cheesy urban-styled writing, and over the top hand gestures and use of language… you have to admit that in a room full of animated CGI films, Lascars stands out from the crowd.

The film is not trying to be a life-altering experience, instead it wants you to laugh at these guys’ misadventures.

The dialog in the film is quite fast — for my untrained French ear, at least — so more than half of what’s funny probably went over my head. I do believe, the subtitles were onto something, though. I’d be more interesting in seeing this with French subtitles… just to check.