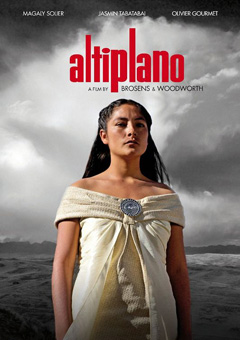 There’s this something really awesome when there’s a co-production between Belgium, Germany and the Netherlands that also includes talent from Peru, and Iran.

Plus, the film also has one of my favorite Peruvian actresses — no, not Magaly Solier… but Norma Martinez. I’m telling you, she’s one of the most overlooked actresses here, just because she doesn’t have an overly recognizable name.

Anyway, the story in Altiplano is pretty straightforward, showing us the interconnected stories between a war photographer who had the bad experience of witnessing the execution of her Iran guide, and an Andean village who are uprising against a contaminating mine that have cost some of their loved ones’ lives.

Political views aside, Altiplano is a more contemplative film, focusing a lot of its resources on beautiful (but sometimes weird) imagery. And boy, it is beautiful. Some of the most complex framing in the film, makes it even worth checking this out just once.

But that’s it, after contemplating the film, it left me with little. I didn’t feel anything after it, I wasn’t taken through a powerful life mind-blowing experience. We just scratched through the surface of the characters, and the film was done for — only pleading that we had emotions of guilt over the people who died due to the mining, when in fact they were nothing but newspaper headline deaths.

Is it a poetic experience? Maybe. Maybe it’s one of those films just for a certain kind of people.