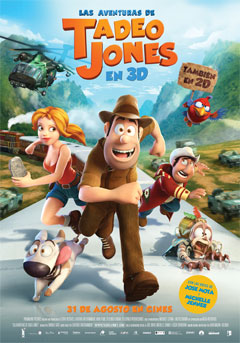 It’s a strange world when a kiddie movie bothers more with research than a Hollywood blockbuster. I am looking at you, Indiana Jones and the Kingdom of the Crystal Skull.

The story is about Tadeo Jones, a construction worker who has dreamed about being an archeologist since he was a child. One day, through a series of accidents, the opportunity presents itself, and Tadeo seizes it. Now he is in Peru, representing Dr. Humbert as an “assistant”, with his faithful dog Jeff and waiting to meet Dr. Lavrof. There he meets Sara, the daughter of Dr. Lavrof, Freddy, their guide and street vendor, and Belzoni, Dr. Lavrof’s mute parrot. Together they have a key that will lead them to the lost city of Paititi. Unfortunately, they are not the only ones after it. There’s Odysseus, an evil corporation of treasure hunters that wants all the legendary gold in Paititi for themselves.

This is certainly a movie for kids. The premise is simple, the script is predictable, and the humor is easy. It doesn’t mean the movie is bad, just nothing spectacular. It certainly managed to achieve what it wanted. As you can infer, Tadeo is parody of Indiana Jones, and there are the usual tropes for these adventurer movies. That said, besides making Peru smaller than it actually is (you cannot just walk a day from the coast to the jungle) and confusing the Incan and Chimu cultures, the landmarks are in their proper places, the made-up ancient citadels look more-or-less genuine, and the things that do exist actually look like the real thing. Especially Cusco. Kudos for that!

Now let’s talk about animation. While Las Aventuras de Tadeo Jones cannot be fairly compared to the works of monsters such as Pixar and Dreamworks, it is a decent animated movie. Its major flaw might be in the animation of living things. It mostly flows well, but there are some times where you can see it’s lacking. On the other hand, nonliving things seem to be their niche. Everything from buildings (ancient and modern), gadgets, vehicles and even lava looked quite good. One thing that covered up for most of its weak points was their “camera” use. The creative use of camera angles and movements made it all very dynamic and was on point when showing the things that they did well.

As a side note, I must say it took me by surprise to hear One Direction’s What Makes You Beautiful [MV]. I think I preferred the original film score even if it was very basic. It flowed better than the pop songs like the aforementioned one and The Momones songs. Although apparently the song Te Voy a Esperar (I’ll wait for you), which is the main theme, got popular online in Spain.