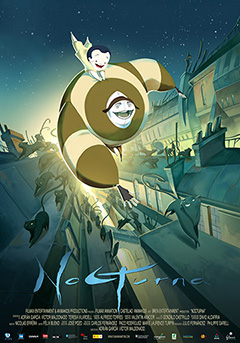 This will be a short review.

I really have no idea how I miss this gem of  French-Spanish animation, which definitely laid the right elements for the resurgence of alternative animated films from both of those countries for the last five years. And very much like Le Tableau managed to wake my sense of wonderment, Nocturna tickled the child inside of me.

In it we follow orphan Tim, a tiny boy who is afraid of the dark — like many kids around the world — but every night, when it’s time to go to bed, Tim meets with Adhara [1], a bright star which Tim calls his own as “she” keeps him company in the darkest hours. However, Adhara suddenly disappears one night, and Tim is kept awake to the inconvenience of El Pastor de Gatos (aka. The Cat Shepherd, Arias), a strange creature in charge of an immense number of cats who take care of each of their children when it’s time to sleep.

The curious Tim manages to get around El Pastor’s pleading for him to go back to bed, and in turn is introduced to the wondrous world of the night, known as Nocturna, administered by the caffeine-addicted Sr. Moka (Sobera), but something isn’t going right at nighttime.

The character design is simple, but imaginative in its making, so I loved it. The little nudges explaining why people wake up with bed-hair, how children end up wetting their beds, or why we hear strange sound symphonies, it’s all there telling us that at night we are not alone. Considering its universe, I immediately connected it to one of my favorite animated films, Little Nemo: Adventures in Slumberland, and while the underrated classic might be a little bit scary, Nocturna has even less of that -though not devoid of it- as it always puts the emphasis into explaining the things Tim might fear. It’s got the adventure, but definitely scaled down.

The other highlight of Nocturna is the animation, of course. Dynamic and agile in contrast to the cooler color palette of the night sky, it’s sure to look amazing in the GKIDS Bluray release, which animation aficionados should definitely add to their collection. It’s certainly in mine.

Note: I couldn’t find a voice acting credit for Tim.