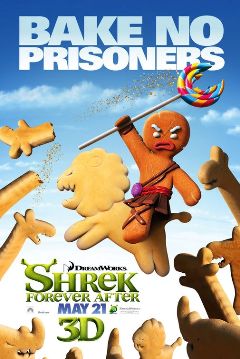 The final chapter of the Shrek series asks an interesting question: what kind of world would Shrek live in if he never met Fiona and his friends?

Shrek Forever After follows the green ogre during a mid-life crisis; he is now a bored and domesticated family man who also happens to be a tourist attraction. Wishing he could feel like a “real ogre” again for just a day, Rumplestiltskin (Dohrn) overhears this and grants Shrek his wish. He sends the ogre to an alternate world — a world without him in it. However, once Shrek realizes he never existed in a Rumplestiltskin-ruled Far Far Away, it’s up to him to restore things back to how they used to be before it’s too late.

Shrek Forever After is better than Shrek The Third, but not by much. The idea of using time-travel is a clever way to try and refresh the Shrek franchise. In the new world, Puss is morbidly obese, Fiona is the leader of a ogre rebel group against Rumplestiltskin, and Donkey is smart yet also a slave to ogre-hunting witches. Thankfully, Justin Timberlake’s Arthur isn’t here to drag things down.

Unfortunately, the fourth film doesn’t explore the time-travelling premise completely and fails to capture the magic and humor that made the first two Shrek films work like a charm. There are fewer jokes and even fewer memorable moments thanks to the script. Still, I gotta admit I laughed during a scene involving the Pied Piper and Rumplestiltskin’s witches dancing to his music.

Banderas as Puss still delivers — no wonder the cat is getting a spin-off movie, he’s just great at what he does. Mike Myers carries the film decently, while Diaz and Murphy are alright with their roles. Walt Dohrn voicing the main antagonist felt kind of obnoxious to hear despite his character having an interesting backstory. Also, what’s the point of bringing in Jane Lynch (Glee), Jon Hamm (Mad Men) and Craig Robinson (The Office) if they aren’t going to do much in the film? Come on.

Overall, Shrek Forever After is less annoying to watch than Shrek The Third. But it’s nothing more than just a cash-in on the popular Dreamworks character.