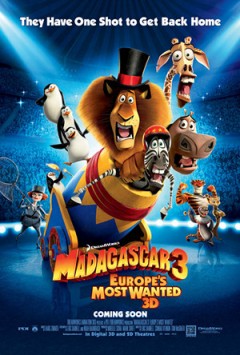 Madagascar 3: Europe’s Most Wanted, the third installment of the franchise, follows Alex the lion (Stiller) and his friends — feisty zebra Marty (Rock), neurotic giraffe Melman (Schwimmer) and lovely hippo Gloria (Pinkett Smith) — travelling from Africa to Monte Carlo in search of the penguins, hoping that they can fly them back to the Central Park Zoo in New York City.

Instead, they make a new enemy in the form of Captain Chantel DuBois (McDormand), an obsessive police officer in charge of animal control in France. After a wild chase, Alex and company find themselves buying a circus to avoid getting caught by Chantel. As the circus operates, the gang hopes that an American promoter gets them back into the States.

I haven’t seen Madagascar 3: Europe’s Most Wanted in English because most (if not all) animated films are brought to Peru are dubbed because of the target audience. Despite the annoyance of watching the film in Spanish, I still found the third Madagascar film to be watchable thanks to stunning animation, good pacing and a script that developed its supporting characters well  — Vitaly the tiger (Cranston) had a nice storyline regarding his past as a professional ring jumper in the circus — and yielded a really good villain that I would have loved to see more of.

While 2005’s Madagascar built up Gloria and Melman as a couple, and Madagascar: Escape 2 Africa was headlined by Marty and Alex, Madagascar 3: Europe’s Most Wanted is all about Alex. While Marty fully embraces the circus by wearing polka dots and a multi-colored afro, Alex is the one who feels more homesick than ever and wants to get back at the zoo. During his stay at the circus, Alex also falls in love with Gia the jaguar (Chastain), which makes him question what he really wants in his life.

The film isn’t without its flaws. It has a predictable plot, but that is to be expected with films of this kind. Jokes are hit and miss, but this a film that still appeals to a younger demographic, despite some of the jokes appealing to adults. I wished that the screenwriting could have been polished better, because Madagascar 3 looks like a legitimate contender for Best Animated Feature Film at the Golden Globes and Oscars based on its visuals alone. Hans Zimmer didn’t do much as the music composer because everyone will remember the catchy Afro Circus — even though I liked Frances McDormand singing Edith Piaf’s Non Je Ne Regrette Rien — by the end of the film. And this is a pet peeve of mine, but I thought that it was unsettling being forced to hear Katy Perry’s Firework twice, which made me not enjoy the neon-colored circus sequences.

For all it is worth, Madagascar 3: Europe’s Most Wanted will end up satisfying the fans of the franchise with its humor, characters and great animation sequences. I read online that a fourth film might happen, but let’s hope that it doesn’t because the final minutes of Europe’s Most Wanted serves as a great way to end the franchise on a good note. I’m aware that Madagascar can draw lots of money, but it doesn’t need to be beaten to death like what happened with the Shrek films.