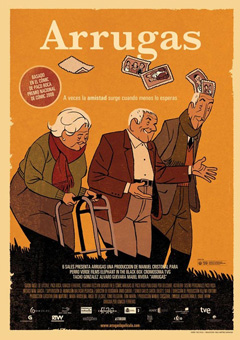 If I could make a movie poster quote about Arrugas, it would say “Most depressing movie of the year!” And that’s a good thing.

Arrugas, or Wrinkles if you may, is an adaptation of the Paco Roca award-winning graphic novel of the same name, taken to the big screen by Ignacio Ferreras with faithful guidance of its creator. It tells the story of Emilio (González), an old man whose son puts him away in an elderly home because he has become an inconvenience to his son and his wife.

Feeling like a used object that no longer has a purpose, Emilio meets his new roommate — the vivacious Argentinean “con artist” Miguel (Guevara), who doesn’t hesitate to take 10 Euros from Emilio’s pockets with some not-so-swift talking. He introduces him to the gang — a bunch of other residents lingering long enough until they’re moved to the second floor and never seen again.

To tell you that the themes in Arrugas tend to veer into the most depressing side of life is probably an understatement, with residents that have lost their faculties and have become mere echoes of who they used to be, abandoned ones who have been left behind, or those who have resigned themselves in this place to not inconvenience others. They’re all characters here one way or another. Little by little Emilio begins losing himself while building the foundation for a lasting relationship that makes up the backbone of the film.

Though most of the characters are kept at a distance — to avoid sappy sentimentality in favor of comedy that could border the darker side of self-deprecation — Arrugas delivers enough heart right before its third act, making its ending pivotal. I gotta admit that even if I didn’t like Miguel during the whole film, his character arc is what makes Arrugas what it is.

The style of animation is true to its source, because — well, Paco Roca is involved in it, and there’s no reason he wouldn’t be true to his own material. This makes the film stand on its own stylistically in the sea of animation. My only gripe about it was during the scene in which Emilio ends up in the pool with Miguel chasing him. There were some shaky cam shots that felt completely unnatural and almost took me out of the film. But overall, Arrugas is a strong piece of animation that stands tall in the pool of Spanish animation alongside Chico & Rita.

I’m excited to see more of what Spain can do with the medium.