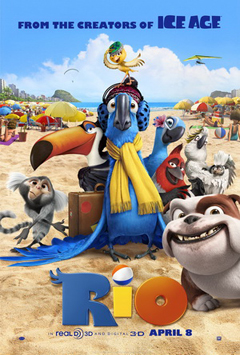 Rio is the story of a domesticated Spix’s Macaw who was, for lack of better words, rescued by a little girl in Minnesota as he was being transported by exotic bird smugglers. Blu and his owner, Linda, grow to be the best of friends. The perfect balance of their life, inside a book store, is interrupted one day when Tulio, a Brazilian bird scientist, knocks at their door. He explains to Linda that Blu’s species is at the brink of extinction. After much persuasion Linda decides to take Blu back to his homeland, Brazil, where he is meant to procreate with the last female Spix’s Macaw, Jewel.

To be completely sincere I expected to laugh more. With that said I’d like to clarify that the movie is very funny, just not burst your gut kind of funny. The humor is in fact on the dry side. This is mostly due to the fact that our main character, Blu, is a very geeky, very book wormy bird. Yeah, smart jokes; which I adore. And, of course, we can’t forget who the vocal talent behind Blu is: Jesse Eisenberg. I personally thought he did a great job. What compliments this humor is that Blu never learned how to fly. Imagine him trying to mingle with birds in Brazil when he can’t fly. Add to that him trying to figure it out using physics. Am I alone in this?!

What I loved most about the movie, though, was the ambience they managed to create with a sweet blend of Brazilian music and the beautiful scenery of Rio de Janeiro. The soundtrack is absolutely beautiful. Who doesn’t enjoy samba? It’s the liveliest music in the planet! But the creators really had the musical cues on point. Then we couple that with Will.i.am singing. It’s an instant must have soundtrack. It’s also dutiful to mention that the musical scenes in the movie were a stunning visual degustation. In this sense we can say that the use of the 3D technology was well employed. The scenery looked vibrant, alive, with depth. Oh my god the Carnival scene!! Loved it!

Liked it? Now playing in theaters!