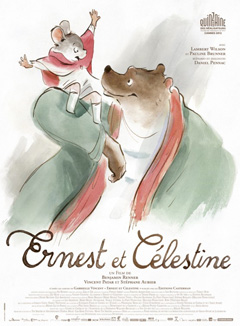 There’s been a lot of visually interesting animation coming from France (and Spain) since 2010. From Sylvain Chomet’s l’Illusionniste, suicide-crazed The Suicide Shop, the cat-obsessed A Cat in Paris and The Rabbi’s Cat to my favorite with Le Tableau. Joining them is the charming tale of a small mouse (Petite Souris happens to be the French name of the Tooth Fairy, just like el Ratón Pérez is the Spanish name) called Celestine (Brunner) and her unusual new found friendship with a hungry bear named Ernest (Wilson).

Picture this, little mice are brought up to steal fallen or lost teeth from cub bears because theirs are strong and a good replacement for grown mice worn-out teeth. Teeth are a mouse’s raison d’être. However, Celestine is a dreamer (not a dentist) who loves to draw… even scary pictures of the tales she’s been hearing of mice-eating bears.

When a tooth-hunt goes wrong, Celestine meets Ernest, a bear who helps her complete her teeth quota for the promise of food, but instead ends up on the run and in hiding for the winter with this girl mouse. Ernest & Celestine brings to life the characters in Gabrielle Vincent’s 80s and 90s children series with enchanting precision. Though the character design dose differ from Vincent’s watercolor illustrations, the film retains the warm and earthy quality while modifying and cleaning-up lines fit for animation.

The story is simple, though not devoid of important themes such as friendship of an unusual nature and the social acceptance of it, imaginative with its universe engrossing adults and children alike with the lovely depiction of its main characters. The more innocent ones will empathize with the small dreamer that wants to be something more than that which she should be doing, while there’s plenty of grumpy humor from the simpleton bear who has to offer more than he’s willing to let on. Their relationship progresses at a leisurely pace, despite never reaching the 90-minute mark, a feature that is seldom achieved in movies.

The most surprising aspect of the film for me is that Ernest & Celestine asks us in a straightforward manner why can’t a small mouse and a bear just be friends without causing a ruckus — why can’t they live together? You can draw so many parallels from that, it’s amazing how when we’re grown up things never get any easier. With heart-warming magic and a little understanding, everything should be possible.