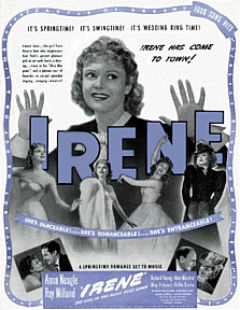 This film is a real gem from RKO Radio Pictures, based on the 1919 stage musical Irene by James Montgomery. Directed by Herbert Wilcox, Irene is part screwball comedy, part musical, part romance and part comedy of errors.

Irish immigrant Irene O’Dare (Anna Neagle), an upholsterer’s assistant, meets wealthy Don Marshall (Ray Milland), while measuring chairs for Mrs. Herman Vincent at her Long Island Estate. He instantly takes a liking to her and sets her up as a model for Madame Lucy’s, an exclusive Manhattan boutique (that he secretly owns). Socialite Bob Vincent falls for her as well. Irene is soon mistaken for a rich Irish socialite and the rest of the film takes place under that misapprehension.

Anna Neagle is effervescent as the titular Irene and Ray Milland has the charm turned all the way up. The two are a delight to watch as they match wits time and time again. May Robson steals every scene she’s in as the stern Granny O’Dare.

Although filmed primarily in black and white, Irene also features a fabulous technicolor sequence in the middle of the film during a ball held by Mrs. Herman Vincent. In the scene Neagle wears one of the most beautiful blue dresses to ever grace the silver screen.

Largely forgotten today, Irene is a fun, and at times strikingly witty, romance as timeless as any film from the era.