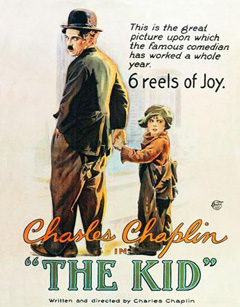 Opening the film with the title card of “A comedy with a smile–and perhaps a tear,” The Kid begins with The Woman (Purviance), leaving a hospital after she’d just given birth. Young, not married, and not able to support herself, she decides to leave her baby with a wealthy family as she walks by a fancy neighborhood.

Bad luck strikes as The Woman leaves The Kid (later played by Coogan) in the backseat of a fancy car, only to have the car get stolen by a couple of low lives who don’t notice the baby in the car until they’re in a lousy neighborhood. They immediately leave the defenseless baby in the street where he is found by The Tramp (Chaplin).

For a film that’s already 90 years old (almost exactly to the date), Chaplin’s The Kid is surprisingly fresh. And even a little groundbreaking with its genius dream sequence by the end of the film. The Kid, unlike many of our current films, is fast-paced, smart, and has a lot of heart. It’s never afraid to be a little melodramatic, but never misses a comedic beat. It’s definitely a good start for those not familiar with silent films, who will probably find it easy to get into just because of Chaplin’s comedy style.

The cherry on this bitter joyful combination is, of course, its characters. The lives of The Kid and The Tramp are sassy. They live in misery but are not empty, never truly depressed- never wallowing in self-pity. They must do a lot to get by, and we laugh with them when they have to break some windows in order to fix them to make ends meet, it’s a terrible fate that had plagued a majority of people’s lives (and probably still does), but we grow with them as we see them grow together, until the moment when you reach all the emotional punches- it’s classic storytelling, but it works on so many levels.

Compelling and quite the technical achievement, The Kid stands the test of time and will still become other people’s favorites, as they discover and re-dsicover the genius storyteller that Chaplin was and will always be.

Watch it for free on YouTube | Like it? The Kid is part of the The Chaplin Collection, Vol. 2