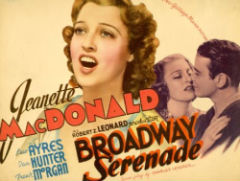 This is perhaps not the greatest musical ever made. It’s definitely not the greatest of the MGM musicals in the 1930s. The only print available is a bit grainy and hasn’t aged too well. Regardless, I happen to love it.

Jeanette MacDonald, best known for her musicals with Maurice Chevalier (One Hour With You, Love Me Tonight, The Merry Widow), stars as amateur singer Mary Hale whose partner (and secretly also her husband), composer Jimmy Seymour (Lew Ayres), has a bit of a temper. Jimmy’s temper gets the duo fired from several gigs before the two land an audition for Broadway producer Cornelius Collier, Jr. (Frank Morgan). Collier is only interested in Mary, who is going to turn his offer down before Jimmy tells her to go ahead. He’ll wait til she gets back from being on tour. However, while she’s on tour she becomes a huge success thanks to wealthy banker Larry Bryant (Ian Hunter) and she returns to make her Broadway debut a star. This causes strife between the two, whose relationship had remained a secret until Jimmy decides he wants a divorce. A lot happens after they’re divorced, but I don’t want to spoil the ending.

The songs aren’t very memorable, though MacDonald sings them beautifully. What is memorable about the film is Lew Ayres. A relatively well-known star once upon a time, Ayres is largely forgotten now, even among classic film fans. It’s a real shame too, as Ayres is always good. He brings such passion and such strong presence to every scene of every movie he’s ever in. I think Ayres was a little ahead of his time, in terms of his style of acting. His energy and strength seem perfect for the 1950s and feel a little out of place in this run-of-the-mill musical. But it’s his performance that makes it worth watching.