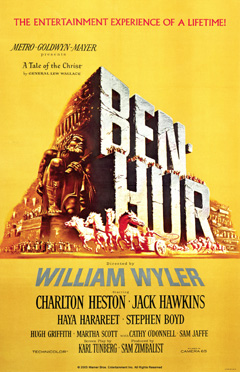 The most grander than thou religious epic ever created from the Hollywood machine, smashing its way through film history by being the first film to win 11 Academy Awards; only ever matched by Titanic and Lord of the Rings: Return of the King. Whereas those award-winning films have their detractors with Titanic often labeled as romantic sap and LotR3 often quoted as the sum of all that was achieved with Peter Jackson’s trilogy, Ben-Hur still stands on its own greatness after over 50 years. By now, the film is an Easter week staple and continues to marvel us with its technique and story, even if you tend to be on the “atheist” side of things.

In spectacular high definition is even better.

The film, as its alternate title indicates, is “a tale of the Christ” from the particular point of view of Judah Ben-Hur (Heston), beginning with a familiar tale of a star shooting through the surreally detailed night skies and a baby born in a manger. Fast forward nearly 20 years, and we see two childhood friends reuniting- two naturally “born” enemies, a Roman and a Jew. Ben-Hur meets up with his pal Messala (Boyd), who has arrive in Judea as a second in command to put some order into the “rebellious Jews” that seem to be stirring up some trouble in the city. Filled with illusion and hope the two friends could collaborate, Messala asks his rich friend to betray his people so that both could live as Roman friends, causing a fallout that will cause both of them a lot of harm.

After unfortunate events, in which Ben-Hur is sent off as a slave to work at the galley harboring a grudge that will fuel his will to survive, he will confront his ex-best friend at a chariot race that will mark the history of film forever.

Though it is ironic that the most iconic sequence in Ben-Hur wasn’t planned or executed by Wyler, who decided to delegate the whole sequence to his second unit director, Andrew Marton, the film still holds up despite its massive running time of nearly four hours. Performances are quite great with an outstanding Stephen Boyd playing a layered evil Roman, and while Heston’s performance was hit or miss for me depending on which scenes he was in (Ben-Hur was kind of whiny at times when placed against ex-slave, Esther (Harareet)), he was his best opposite Boyd. An interesting enough detail, considering Gore Vidal’s debatable observations given on The Celluloid Closet, and the telling Messala quote “Is there anything so sad as unrequited love?” which really seems to be the catalyst of everything that befalls the Hur family.

Besides being a moralistic tale — did you all notice how when Ben-Hur kissed the betrothed to another Esther, everything began going wrong for all of them, and when they kissed once again as single people everything begins fixing itself? — with strong religious tones, telling us everything happens for a reason, Ben-Hur’s journey isn’t different to other heroes’ journeys, Homer’s Odyssey or even Lucas’ Star Wars, in Ben-Hur‘s convoluted making-of the script, they managed to make a tale that is easy to relate to even if one is not familiar with the myth behind it, even after these many years, its story is as broad and universal. Friendship, love, hate, revenge and forgiveness will always be themes that touch people.