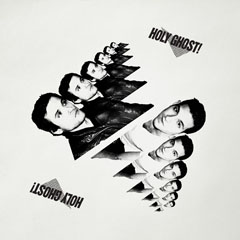 It was 2008 when I found myself in the dark of the now dead and long gone The End in London, a basement soundtracked by all-night electro and cow bell. My small-town Italian cousin was discovering dance music for the first time, nodding and bopping a lot with Boris Karloff arms as part of some faux psy-trance out learnt from the 90s, and I watched how his spectacles slid closer and closer to the edge of his sweat-damp nose.

By the bar, meanwhile, a camp Chinese-Brit no younger than 16 wore a Flavor Flav clock round his neck, screaming, “I’m late, I’M LATE!!” into the face of his tweeny girl companion, who’d come dressed like a French maid with Playboy ears. The DJ appeared to be invisible, I was having fun, and tune of the night had to be Holy Ghost’s shimmery Hold On, their classy little debut on the New York dance scene released the year before.

So it’s been four years, and somehow Hold On turns up as the sixth track on this, their debut album. Four years, which is practically forever ago, no? Most indie fawns neglect their early 7s by the time they get into the studio to lay down their first LPs, or at least re-record them. It’s still a great song, of course, but it seems nutty to include this at the expense of their other great single, 2009’s I Will Come Back, which really should be on here in some way, shape or form. Insanity.

Anyway, Holy Ghost! have otherwise made a record perfect for DFA sensibilities, being warm, indie, and nicely retro, the distinction being, like tour partners Cut Copy, HG! are also slick at crafting great tunes. Whilst Cut Copy mine the early 90s, Holy Ghost come from somewhere in the late 70s, between the slinky vibes of Motown Chicago, bleeding into disco and Detroit House. A supreme disco bounce can be heard on stand-out track Wait and See, whilst the tempo is turned nicely down for Say My Name and Static on the Wire, which both jam atop slow chords and Studio 54 drums. Guitar solos take the stage, subdued with sophistication. Hold On still remains the perfect example of this approach.

That the song has been included shows how the band’s taking a ‘safety first’ attitude here, when really they’re definitely capable of loosening their shackles to dip into the danger dynamics shown through  I Will Come Back, which took on a harder, darker Arthur Baker edge, completely capturing the vibes of an aimless attack on the town. Variety aside, Holy Ghost is still the best DFA record to come out since the last LCD and Juan Maclean albums, and definitely an essential release from the label. Four years on from their debut single, that’s saying a lot, especially when considering how many young men and women have come and gone to drop small vinyl bombs on the NY dance scene, never to be heard from again. A happy Ending I’d say.