Into the Forest (Canadian Film) 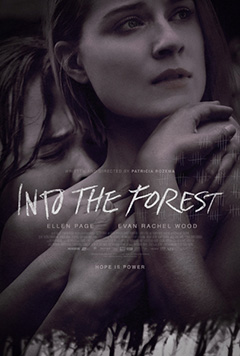 About a decade ago, I had graduated high school, moved to another country to study, and started to watch more films outside the mainstream. I also got really into Evan Rachel Wood, Thirteen had just opened in Vancouver and headed to the theater like a fan would. I haven’t followed anythings on her filmography since The Ides of March in 2011, so I had no freaking idea I missed her until this.

Thank you, Patricia Rozema. Thank you, Canada. I didn’t know I needed a movie with Ellen Page and Evan playing sisters.

Based on the novel by Jean Hegland, Into the Forest (not to be confused with Disney’s musical adaptation of Into the Woods or The Forest) follows the lives of Nell (Page) and Eva (Wood), mismatched sisters who must fend for themselves after there’s a massive power outage that isolates them in their woodland family home.

Budgeted at a supposed $5-10M (not noted if it’s CAD or USD [1]), the -sorta- post-apocalyptic drama sets itself in a nearby future of slick home gadgets as we see Nell studying for her medical SATs in her clear flat-screen computer, while Eva practices her dance steps for the try-outs of a dance academy she probably won’t get into because she is already “too old.” Their dad (Rennie) is with them as the power outage strikes, and it never seems to come back again, though they resists having to let go of civilization as long as they can.

Page seems to be coming out of a strong July with this, alongside Netflix’s Tallulah, despite that very funny Letterboxd comment pointing out Page’s characters’ outfit similarities. Both films have lukewarm 6-ish ratings on IMDb at the moment, but they’re not bad at all. The source material of Into the Forest apparently had two controversial scenes— a rape that triggers the third act, and it’s totally believable in the context of the story (and you can see it a mile away since the supermarket scene), and fans of the book mention an incestuous scene, which I frankly didn’t see on screen… but maybe for some, it’s hinted at.

I felt the sisterly relationship was very well done, showing the friction of their personalities, but managing it effectively the moment they were saying goodbye to each other, as well as leaving things behind. You know you’re into the story when your heart sinks as you realize bad things will happen to them. It’s not as depressing as John Hillcoat’s The Road, as it definitely focuses on building up the sisters’ bond with their surroundings to break away from -you could say- society’s status quo.

There’s two scenes that I thought would upset a certain demographic, just like Argentina’s Paulina (aka. La Patota) did when Dolores Fonzi’s character decided to not abort her baby, which was the result of a rape. As well as the moment Nell suggests changing Eva’s diet by hunting a wild pig. Coincidentally, they’re all in the 6-ish range on review aggregator sites.