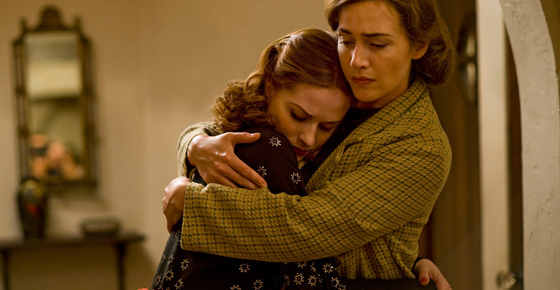 HBO’s 5-part mini-series is a readaptation of James M. Cain’s novel of the same name, which was first adapted to the screen as the 1945’s Mildred Pierce, with Joan Crawford in the title role. It tells the story of suffering mother Mildred, who does everything in her power to give everything she didn’t have in life to her daughter Veda.

This time around, Mildred is played by Oscar Best Actress winner Kate Winslet, while her spoiled daughter is played — later in life — by Evan Rachel Wood, and the manipulative Monty played by Guy Pearce, all under the direction of  Todd Haynes (Far from Heaven).

HBO’s Mildred Pierce is a more faithful adaptation of Cain’s novel, told in chronological order instead of flashbacks and voice-overs, and also plays as a full-on drama of the period instead of a film noir. The art direction is perfect, every little detail of the houses, cars, clothing, exteriors, everything screams 1930s.

In it, Winslet’s Mildred is fragile — not aggressive at all — and a lot more conflicted internally. When Melissa Leo’s character Lucy suggests that Mildred give a little something-something to none other than Mildred’s ex-husband’s ex-co-worker, we see her doubt, we see her fight, and finally give in. When Mildred must look for a job, we see her flinch, too proud to be a maid, to proud to be a waitress.

When the time comes to get back with her daughter, Mildred is weak. She doesn’t really let Monty know what she needs him for, and in that sense looks manipulative. But it seems more like Monty manipulating us into believing it’s everyone’s fault but his, everything — the attitude, and everything. It makes Winslet’s Mildred more complex, but in need of a shrink.

Mildred’s relationship with older daughter Veda, first played by Morgan Turner then by Evan Rachel Wood, takes a little getting used to. Because they’re played by two different actresses with a similar number of episodes, it’s more difficult to accustom our brains to either of their faces. Veda is still an insolent child, but Wood’s older Veda is more cruel to her mother, despite having the same speech as Ann Blyth’s version. In Blyth’s speech against uniforms and grease, we feel like slapping her to shut her up, while Wood’s delivery is a lot more defiant against Winslet’s less dominant role.

The problem with HBO’s Mildred Pierce is that it is a lot longer and a lot more boring. Haynes’ pacing in his stories aren’t everyone’s cup of tea. Top that off with Winslet having to fill Joan Crawford’s Oscar-winning role — those are huge shoes to fill.

While the mini-series offers several more hours than the film, it does not go deeper into the complicated relationship between mother and daughter. Instead, we get a lot more about Mildred’s relationship with the world, as a separated woman, and as a woman looked down upon by “rich” people. Her relationship with Monty is, at first, cautious and as that relationship begins deteriorating, we get to see his manipulations. Pearce’s Monty is a cocky douche that happens to be good in bed, and many times got what he wanted to take.

In the end, fans of the novel would be happy for such a faithful adaptation, but HBO’s Mildred Pierce is tedious and boring at times. It would have probably been better material for a two-part series.