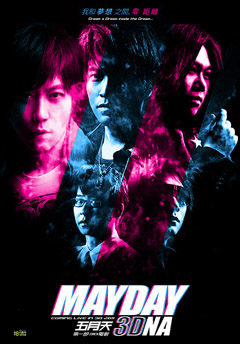 Even though I’m a really big South American Mayday enthusiast, I was very interested in this project, not because it was a Mayday concert shot in 3D, but because the project — a simple concert movie — was mixed with a fiction drama story.

Unlike the Glee Concert, which was a concert documentary, Mayday 3DNA has short film interludes that converge into the amazingness that is this Taiwanese group.

The movie begins with the OAOA [MV] music intro, which gives way to DNA, Can’t Hear (聽不到), and The Most Important Little Things (最重要的小事) that give way to our first storyline. Lele (Tan Yi Le) is a girl in Guangzhou, Guangdong province, who is a very big fan of Mayday and wants to attend their concert in Shanghai, but her father doesn’t let her because she’s too young to go on her own.

In typical (Chinese) child fashion, she does the impossible to get her dad, Chef Fatty (Lam), to let her go to the concert. Coincidentally, chef aid Xing (Wang) is attending the concert with his girlfriend — who might or might not be a little pissed off when she finds out he is trading his ticket for a secret recipe of curry soup and fishballs.

The second storyline involves a Taipei taxi driver (Ren), who after his recent break-up picks up a passenger with a new broken heart (Liu). He takes her up on a quirky revenge trip involving photos of her ex and a baseball bat. The final storyline surrounds bike courier, Yujian (Zhang), in Shanghai. He is saving up enough money to get a ticket for the concert.

Though the 3D used in the film is oftentimes cheesy — rocks or bubbles floating around, or at one point a string of photographs coming out of the screen — at times it is also used effectively, giving you an immersive concert experience with the camera straight on Mayday on stage and interacting with the fans. The rest of the film does well with or without the technology.

There’s a lot of good points in Mayday 3DNA on a second view, like Suet Lam’s performance as the worrisome, lovable Chef Fatty. He makes his storyline work when his daughter is pouting. It’s not like little girl Tan Yi Le lacks the charisma, but Lam’s gestures and actions bring it home.  There’s also the wonderful explanation as to why biker Yujian wants to attend the Mayday concert. It’s perhaps less about the performance in that sequence and more the execution in the reveal that does it for me — after all, I’m a sap.

However, while Richie Ren and Rene Liu work great opposite each other, their story doesn’t fully seem to fit in the story as well as the other two.

Despite all the great music, Mayday 3DNA doesn’t truly deliver with its ending. I actually felt kind of cheated and would have preferred a happier ending. The way that it is now doesn’t make the third story fully pay off for me. I wanted that one to have the happy ending the most! I don’t often favor happy endings, but this one deserved one.