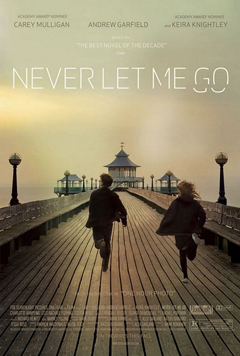 Based on the novel of the same name by Kazuo Ishiguro, Never Let Me Go tells the story of a group of children growing up in a very special kind of boarding school.

In an alternate universe where human beings have finally mastered the “art” of donors and transplants, three little kids named Ruth, Tommy and Kathy will never grow old to become teachers or doctors… or parents.

Never Let Me Go is a very tough film to review without spoiling bits and pieces. It’s really a visually stunning film that will leave you with a big emptiness inside. It will also get you to discuss medical ethics and what would be really right or wrong about donors and transplants.

If I’m allowed to say this, without igniting anyone’s fire, I thought to myself that Never Let Me Go was like The Island… but about the people and without the explosions. That’s the most simplistic way to describe such a complicated topic.

The film contains some very subtle acting from shooting star Carey Mulligan playing grown up Kathy opposite star-in-the-making Andrew Garfield in the role of Tommy, and Keira Knightley, who finally shows up in something to be happy about, playing Ruth.

However, it is undeniable that this is a Carey Mulligan vehicle, and she plays Ruth as a compassionate and realistic person that will get you to question your own ethics — whether you’re on one side or the other. It is her you feel for, it’s Ruth we’re rooting for, and when things don’t go that way, we feel a bit of our hearts tearing to pieces.

Time is what you make of it.