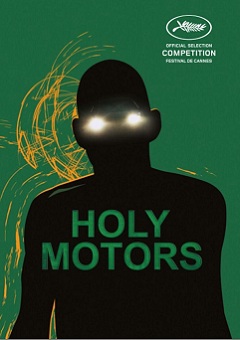 It takes no time at all for Holy Motors to dive into the surreal world it wants to explore, starting the audience off with a look at a theatre full of sleeping patrons as films go on. Are we to assume that these people are all dreaming up their own realities with them in the lead roles? Is this what is being projected on screen? Could be. Then again, it could be nothing. Or something completely different. That’s the beauty of Leos Carax’s Holy Motors: it offers a million possibilities with the telling of one man’s wild story.

Denis Lavant stars as the film’s main character, Monsieur Oscar. We know not this man’s true profession, only that he is an “actor” that goes from appointment to appointment changing his personality, wardrobe, and visage with each scenario he is placed in.

The line between fiction and reality is extremely blurred in Carax’s universe, as is that between life and death. Where one of Lavant’s roles end, another quickly takes its place, and some come to much darker ends than others. Yet no matter what the character demands — be it death, motion capture sex, or simply driving a young girl home after a party — Lavant delivers.

As everyone well knows, a brilliant performance and a perfect story do not always go hand-in-hand. Relying on these nine appointments makes the film feel a bit like an anthology of sorts, where each appointment churns out a different story, and not all of them feel completely right in the context of the overlying arc. Though not bad or entirely out of place, two or three of them are forgettable when followed or preceded by something riveting.

Bizareness aside, there are a lot of little things that hint at what Carax tries to achieve with his film, and the film really serves as a brilliant commentary on multiple topics. For one, it deals with people’s constant longing for reality — so much so that we dispose of anything past for a new, smaller, different future, but its true focus is on a critique of cinema. Each vignette, whether appealing or not, criticizes cinematic styles, narratives, and even the way films pander to audiences.

Carax also references the careers of each of his main actors. Lavant has always been a close collaborator, and his character Merde from Tokyo! is featured here. Edith Scob’s character, who fascinates in her short time on screen, reminds us of her work in Eyes Without A Face with just one prop that’s enough to make anyone wonder what lies beneath the person we were shown from the start. With Kylie Minogue, the call back is simple — you’ll hear Can’t Get You Out of My Head at a party — but her short and memorable performance offers an amazing depth to the story, and the song she sings might just be the key to unlocking it all.

Some people will find it absolutely barbaric, but Holy Motors is an entertaining piece of art that is definitely one of the most interesting films of the year.