Uncle Boonmee Who Can Recall his Past Lives 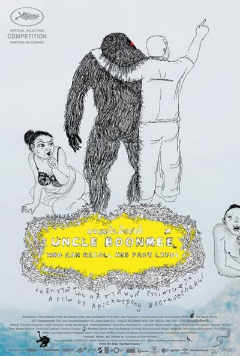 Let me start off by saying that I’m not completely sure I understand what I saw. I’m still a bit in the dark as to what this movie really is about, but I guess that is the movies charm.

Uncle Boonmee Who Can Recall his Past Lives is the story about uncle Boonmee. He is suffering from an acute kidney disease and has decided to spend his last days surrounded by his loved ones. To his great surprise, his deceased wifes ghost pops up to take care of him. His long-lost son makes a visit, albeit in a new form. Uncle Boonmee contemplates his fate as he wanders through the jungle with his family, to finally end up in a mysterious cave on top of a mountain – where his first life was created and his last one ends.

So what about this movie has me in confusion? Well how about all of it? I think I have never been so intrigued yet lost when watching a movie. I understand that many of the aspects that Uncle Boonmee Who Can Recall his Past Lives brings up are rooted in Thai mysticism as well as buddhism; areas I’m not really familiar with. But after obsessing about it for two days, it hit me: this movie fits in the margins of magical realism.

I don’t know how many of you are familiar with the works of Gabriel García Márquez, Ben Okri or Salman Rushdie. If you know of One Hundred Years of Solitude, The Famished Road and Midnight’s Children, then you can kind of grasp what kind of movie Uncle Boonmee Who Can Recall his Past Lives is about. Magic Realism is just that, magic that occurs in realistic surroundings. Occurrences that can’t be explained yet that are accepted. As with Uncle Boonmee’s ghost wife and his son that mated with an ape-god. Or when Uncle Boonmee got freaky with a catfish in one of his previous lives. *cough*

While watching this movie, I lost track of time. Two hours felt like five, not that it was a negative thing. It was like being in a buddhist temple, meditating. I’m not sure I found some form of enlightenment, but I did find tranquility. There was pure beauty in the way Uncle Boonmee Who Can Recall his Past Lives portrayed Thailand. It was organic and solemn, it excited between reality, dreams and memories. It excited on a platform of neither here nor there, where nothing really mattered besides every slow second. I don’t think there is a need to understand what the movie is about; the movie is what you need it to be.

Never thought I would see the day when my literature studies would come in handy in a movie review. The more you know I guess (lol).

P.S I want to give a huge shout out to the movies lighting director, that was some great work. D.S