Eyes Without A Face 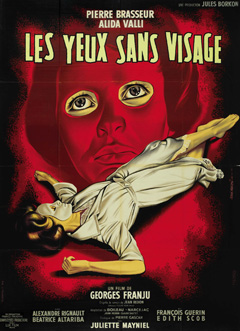 Les Yeux Sans Visage presents the tale of Dr. Génessier (Brasseur), a surgeon who spends his days riddled with guilt after surviving a car accident with his daughter Christiane (Scob) that left her face disfigured. Obsessed with finding a way to heal her, he and his assistant kidnap young women in an attempt to graft their faces onto his daughter.

Christiane’s unhappiness is evident right from the moment she’s introduced, even though her face isn’t visible. The mask gives us a blank, unsettling slate, and yet through Edith Scob’s eyes and ghost-like body movements, audiences experience one brilliant performance that conveys emotion better than one would expect.

Quite different from other films from the same era, Georges Franju’s Les Yeux Sans Visage focuses on creating an unsettling mood rather than going for scare tactics. The idea of Redon’s novel alone is already one that presents a concept far ahead of its time, and the film does a fine job at bringing that to screen. Where excessive gore and blood could have been used, Franju instead relies on a simple surgery for some shock and a blank mask to instill fear.

The choice to shoot in black and white over color is perhaps the best decision, as it enhances almost every aspect of the movie, especially the make-up for Christiane’s face. The film’s great job at establishing atmosphere is slightly hindered by a score that hasn’t aged too well, bouncing between whimsical and eerie, as well as an abrupt final act, considering the pacing of the rest of the film. One could have also hoped for better performances from the rest of the cast, but this could be attributed to Scob always being at the back of one’s mind, even when off screen.

While not a perfect film, Les Yeux Sans Visage is certainly one of the most horror impressive pieces of the sixties and one that has continued to inspire modern filmmakers, notably Almodóvar’s work in La Piel Que Habito.