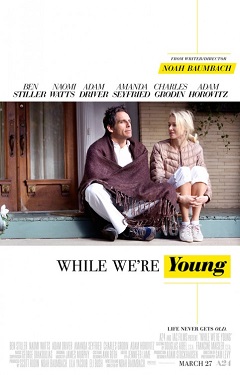 While We’re Young follows married middle-age couple Josh (Stiller) and Cornelia (Watts), whose lives seem to be aimless and unchanged (unlike most of their closest friends), enjoying the perks that comes with being a no-kids couple — this is sadly due to Cornelia’s suffering several miscarriages — with double income at their disposal, and sharing similar interests within the film industry. They experience a big change in their lives when they meet young folks Jamie (Driver) and Darby (Seyfried), a married hipster couple living their lives happily in carefree fashion, which sparks a light in the older couple– especially Josh, who bonds much stronger with Jamie, since both happen to be documentary filmmakers, making them analyse their lives, as well as reminding them of how they used to be when they were younger.

Baumbach’s latest film is definitely more packed in content than his previous directorial effort. While Frances Ha was mostly all about the main character growing up in life and experience, While We’re Young has two couples with differing age gaps interacting with each other and exploring their lives, most notably the pains that comes with ageing and anxieties. There’s also the subjects of the nature of making a documentary film, as well as the ethics in regards of developing these type of films. The documentary angle ends up being the film’s driving force during the second half, especially when Josh suspects something wrong with Jamie, and the themes of authenticity versus artifice comes into play in striking fashion.

Despite things starting at a pretty slow pace until the couples meet, While We’re Young ends up being enjoyable to watch thanks to Baumbach’s direction, which evokes the likes of Woody Allen, Wes Anderson and even Judd Apatow [see: the Ayahuasca scene] at certain moments, alongside witty humor whenever it is through lines or physical comedy, like the sight of Naomi Watts dancing to hip-hop, as well as the set-up to an arthritis joke involving Stiller’s Josh… or Adam Driver’s Jamie being a living hipster cliché and a perfect foil for Josh. Acting-wise, Watts, Stiller and Driver shine the most, while Amanda Seyfried is tolerable, but doesn’t get to do much compared to the other cast members. Even the minor characters such as Cornelia’s father Leslie (Grodin) and the recently-turned-parent Fletcher (Horovitz) are slightly more useful and interesting to the film’s storylines than Darby. Grodin’s character is involved with the documentary angle, while Horovitz’s Fletcher serves as a middle-aged voice of reason for Josh and Cornelia, which is ironic if you consider Horovitz’s Beastie Boys past.

Recommendable to watch for the generational clashing and points of views that Baumbach displays as well as the cast. And a fair warning for people who are fans of Ben Stiller: this is definitely not your typical Stiller comedy film.