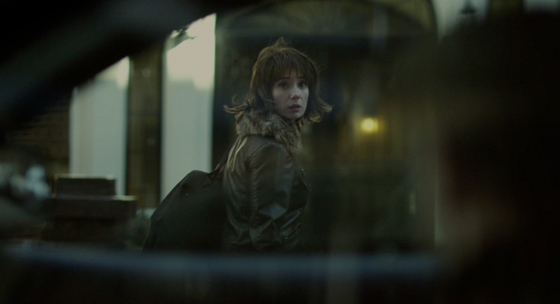 About three years ago writer director Mako Kamitsuna did a Kickstarter campaign (I did not know this) to fund this short film starring Chulpan Khamatova as a Russian woman named Katya who arrives in America and takes the cab ride of her life when she meets her driver, Viktor (Krupa), a Russian man whose path may have crossed with Katya’s past one way or the other.

Though the short didn’t bluntly tell me Katya is a prostitute (like in the Kickstarter description), and I took that bit of dialog in English with the bit about “selling your soul for a piece of bread” as a way for Viktor to counter Katya’s er- “Russianess;” that’s what I thought was brilliant about Katya’s and Viktor’s interaction: their generational and cultural divide. One of them left Russia, as described by Katya “like rats leaving a sinking ship,” and the other one grew up there. It’s a tough spot to be in, but a common one for struggling historically complicated nations.

The rest of Katya isn’t spelled out like in the description of the project, which makes me think that I may have lost A LOT of content from in between the lines and that I have just scratched the surface of the story told by Kamitsuna, or that the short turned out to be a lot different than intended. Technically speaking, I’m impressed that they managed the production quality of this 23-minute short on a budget of $20K (at least from what was made in the campaign), because though strained in scale, the sequences in the submarine and flashbacks were quite well made.

Acting was good — though, that might be my bias showing — I was surprised to see Khamatova’s blurting some English, but my favorite line was when she exclaimed “Russians everywhere!” because that’s one of the things one notices when visiting a place- it’s a familiarity complex, like saying “you get to speak so much Spanish in L.A.” or “Chinese everywhere! Chinatown visit in every city you visit.”

You can get Katya and check other films on Khamatova’s filmography on iTunes.