About… three years ago, I made a list of actors from around the globe. 16 out of my 20 picks are already NOT eligible for this list any longer. Shocking how time flies.

People “graduating” from this list with honors are: (first the men) Kenichi Matsuyama — Taiga no Kiyomori is still running in NHK until the end of the year, the successful Gantz series, his collab with Tran Anh Hung in Norwegian Wood (okay, not entirely good), and Nobuhiro Yamashita’s My Back Pages.

Paul Dano (Knight and Day, Meek’s Cutoff, Cowboys and Aliens), and Jamie Bell (Jane Eyre, The Adventures of Tintin) graduate with… I guess, some honors in terms of mainstream and being in the spotlight once again.

With the girls, we have Carey Mulligan who after her career-making, An Education, comes off a great year with Never Let Me Go, Drive, and last, but not least, Shame. She’s got Baz Luhrmann’s The Great Gatsby [Trailer] coming up, alongside Inside Llewyn Davis by the Coen Bros. 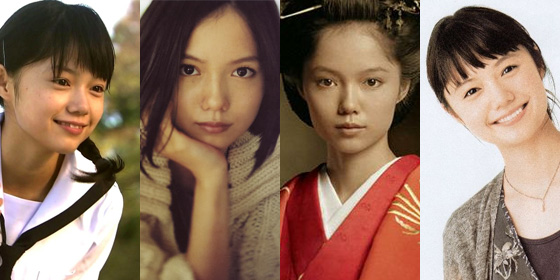 Aoi Miyazaki has been acting since the early millennium. Though she’s graduating with a divorce (unlike fello graduating Carey Mulligan who graduates tying the knot), Miyazaki has an onslaught of films ready to excite anyone.

Another one graduating with high honors is Japanese actress Aoi Miyazaki, who has seven films under her belt, including Colorful, Solanin, Mipo Oh’s Here Comes the Bride, My Mom!, My So Has Got Depression, Chronicle of my Mother, and the two-part series Chouchou-san. Her career seems to be even MORE colorful now that her latest film by Mamoru Hosoda, Wolf Children [Trailer], is about to open. Plus, Insight into the Universe by Okuribito‘s director, Yojiro Takita, another Kanae Minato (Kokuhaku, Shokuzai) novel adaptation titled A Chorus of Angels, another Hiroshi Ishikawa (Su.Ki.Da) collaboration with Sakura Ando with Petal Dance, and finally Yellow Elephant directed by Ryuichi Hiroki (Tokyo Trash Baby).

And sorta also graduating with honors is Evan Rachel Wood, who graduates with a Woody Allen film (even if it sucked), a Robert Redford one (even if it was meh), the high of Mildred Pierce and True Blood on television, and The Ides of March… which, you know, was pretty darn awesome.

So I want to ask you… for this year’s edition of 20 Actors Between 20-25 to Watch until They’re 30, who are your suggestions? Same rules apply from the list:

I will be closing the comments once I get started on my list.