For A Good Time, Call… 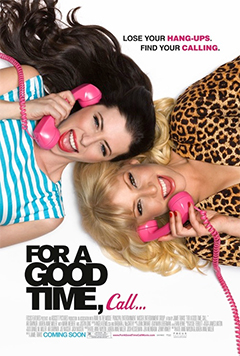 Lauren (Miller) and Katie (Graynor), two girls who hate each other, both find themselves on the brink of homelessness until their friend Jesse (Long) steps in to help them out. After being coaxed into sharing an apartment and running into some job troubles, Lauren discovers some of Katie’s secrets and helps her start up a big time phone sex line to make ends meet.

The days of phone sex may seem long gone, but just stay up past 2 AM for those late night television ads and you’ll see just how spot on For A Good Time, Call… is when it leaves our lead ladies making an ad for their service in a bubble-filled tub. While a lot of the humor lies in the interactions between Lauren and Katie, the crudeness that the plot brings with it isn’t restricted. Who would expect to end up seeing Kevin Smith and Seth Rogen jerking off, in a taxi cab and bathroom respectively, in what many would call a seemingly harmless chick flick? Definitely not this guy, but that’s one of the things that makes it so much fun.

For A Good Time, Call… heavily benefits from being written by two women, one of whom is one of the film’s hilarious co-stars. The writing here gives these characters and their dialogue a real feel, no matter how ridiculous at times, and that’s rare to find in comedies nowadays. You can’t imagine how many times I’ve sat down with my friends and considered jumping into phone sex, and that made the sheer silliness of a lot of the scenes between characters more of a genuine experience. I can’t speak for the ladies, but even watching Justin Long playing a gay man who doesn’t just fall into the same old overly flamboyant stereotypes was a nice touch.

Both Lauren Miller and Ari Graynor are comedy gold and the chemistry they share throughout is an absolute treat to watch. When the story is focused on their relationship, the film is at its best, being as amusing as it is surprisingly heartfelt. Sure, there are a few subplots that don’t matter too much, but that’s because nothing matters as much as how they change and grow closer. The film does take care of some side stories though, one of which might even make for a compelling argument for how a good, comfortable relationship can start without ever meeting someone in person.