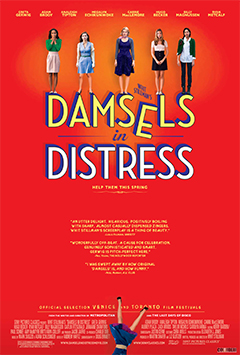 Over a decade after his last film Barcelona, Whit Stillman returns with a movie as charming as it is witty and entertaining.

Damsels in Distress takes place at Seven Oaks University, where Violet (Gerwig) and her friends take in a new student as part of their group. Along the way, the ladies try to “fix” the frat boys they come into contact with and save fellow students from killing themselves through their suicide prevention center. All the while, they find themselves falling in and out of love and dealing with the relationship troubles that plague most college students.

Stillman’s return to cinema after a long break is just as strong as his debut Metropolitan, no matter how different it might seem at the start. He creates this world that seems familiar, full of naive and off-beat characters that one isn’t likely to find in the real world. There’s a lot of love for music and dance here, not only featuring an enchanting Fred Astaire musical number performed by Greta Gerwig and Adam Brody, but also developing characters and plot points through the power of dance.

If it all sounds a little quirky, it’s because it definitely is, but not at all in a bad way. Whit Stillman’s particular brand of humor won’t appeal to everyone, but fans of his previous work will be sure to find something to like about it. With that said, it’s a very different film full of charm, with characters that would be mistaken for Stepford wives were they in any other movie.

Greta Gerwig never ceases to impress and she fits into Whit’s world amazingly. Her look is sure to remind some of Chloe Sevigny’s character in The Last Days of Disco, but rest assured they have entirely different personalities. As great as Gerwig was, the film would be nothing without her fellow damsels in distress, as they all make for a fine ensemble. Maybe it’s residual love from The O.C., but Adam Brody has never been quite as charming as he is here. With all the bit roles he’s had lately, from Scream 4 to Jennifer’s Body, it’s nice to see him put to such great use.

A lot of people will hate Damsels in Distress, but there’s a lot of fun to be found in it. At the very least, it reminds audiences that Whit Stillman has still got it, and everyone should be looking forward to what he makes next.