Glimpse Inside the Mind of Charles Swan III, A 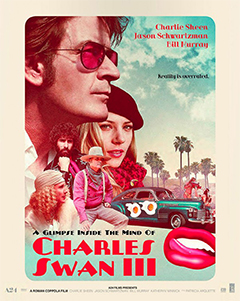 Over a decade since his debut feature, Roman Coppola is back on the scene with a wild and strange sophomore film that’s quite the pleasant surprise.

Coppola’s A Glimpse Inside the Mind of Charles Swan III drops us into the seventies, where a rich graphic designer (Sheen) is going through a post break-up crisis. While recovering from a car accident, he indulges in delirious fantasies and memories of how things did and could have gone with his ex-girlfriend Ivana (Winnick).

While the narrative isn’t perfect and does suffer from a few scenes that feel out of place, Roman Coppola’s writing reminds us all why he’s an important part of Wes Anderson’s Moonrise Kingdom and even The Darjeeling Limited. There’s that fun touch of endless fantasy in all sorts of scenes, from the Secret Society of Ball Busters to the boys and girls playing cowboys and indians, that offer respite from the mildly depressing reality of Charles Swan’s life.

One can still feel that distinct Roman style that was created in CQ, but with this piece he shows a lot of influence from the people he has worked with over the years. It’s impossible to deny the feel of films by his sister Sofia and Wes Anderson lingering throughout, and that’s definitely a positive here. It’s the blend of these styles that make for an aesthetically pleasing scenario to ground the movie in, regardless of being within reality or yet another fantasy.

At heart, regardless of how aimless it might seem at times, A Glimpse Inside the Mind of Charles Swan III is a character study of a man with a broken heart. Charlie Sheen, who surprises in this role after years of crap television and cameos, fits the self-centered character perfectly. He slides into Swan perfectly in his lowest points and, much like the rest of the cast, looks like he’s having a great time while doing it, regardless of any minor character inconsistencies.

The rest of the cast is rounded out by a colorful collection of characters, notably Bill Murray and Jason Schwartzman, who each bring their own touch to Coppola’s script. Katheryn Winnick, who actually sings quite adorably in Portuguese in a beautifully simple musical number, is enchanting in each of her scenes as the woman that constantly plagues Charles Swan’s mind.

Many will be sure to find themselves hating this character and finding the film a strange mess, but A Glimpse Inside the Mind of Charles Swan III is exactly what its title states, and it’s an ambitious little comedy that works on plenty of levels.