It’s been a rather interesting year for me: applying to grad school, dealing with the scandal and bureaucracy of a state agency day job… and joining Twitter. Now, the latter may not actually be anything of real intrigue or revelation for anybody else. But as Julyssa can tell you, I’d been fighting becoming a part of the social media lifesuck that is Twitter since its inception.

Well, she conned me into reopening my Facebook (strictly for business purposes. I may as well not even be back on Facebook for as often as I’m around). With more of her cunning linguistics, she managed to get me to sign up for a Twitter account as well (not as much about business as I’d intended, ah well). However, and I absolutely hate to admit it, if it weren’t for her constant encouragement (read: nagging), there’s a great deal of music I would have just missed altogether.

With that in mind, this list comes to me. A few of these albums I’ve even reviewed on YAM Magazine and at least one of them I knew about without Twitter… so there ya go. 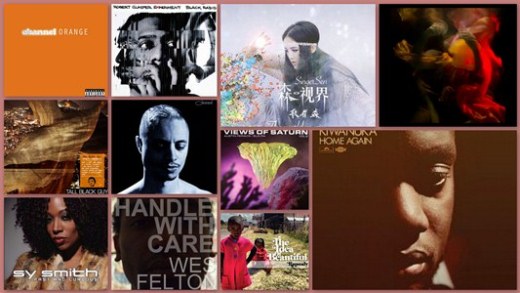 In any event, I stumbled upon the idea of this Top 10 when looking back on the albums I’d actually listened to in 2012. All of them in some capacity have brought something new to the musical landscape this year. It’s astonishing to think that so much innovation and sonic nuance found air in 2012, but here I am, regaling all who care with a list of some of the most inspired music it’s been my pleasure to discover in the last 12 months.

Having said that and taking into account my introduction, it seems despite the alarming Kpop presence in my list of followers, there isn’t a single Kpop album on this list. After all, I’m not exactly a hardcore fan of Kpop, more a follower of a few groups and fan of some songs. So, although there may have been something impressive in the releases this year, really nothing from the South Korea pop scene impressed or impacted me the way these albums did.

Now, with all that out of the way, I give you my Top 10 list of the most inspiring music I’ve heard this year.