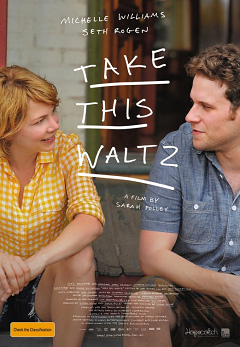 Sarah Polley’s Take This Waltz introduces us to Margot (Williams), a married woman who stumbles upon a handsome artist named Daniel (Kirby) while on a writing assignment for a travel company. As fate would have it, the two find that they live across the street from each other and the chemistry between them develops as Margot fights hard to resist her feelings for a man that isn’t her husband, Lou (Rogen).

There’s something entirely realistic about this little film that allows us to dive to the heart of romance and just how fleeting it can be. Sarah Polley’s writing and direction feels intensely personal, giving us a revealing look into love. From the moment that Polley follows Daniel and Margot with a tracking shot down their block, one can sense the connection building between them through simple chit-chat.

Her use of a warm color palette, gorgeous shots of Toronto scenery, and an impressive soundtrack — featuring artists like Leonard Cohen, Feist, and The Buggles — only serve to add to the film’s captivating mood. The focus of Polley’s writing never strays from Margot, always telling her story through her point of view, but she also offers glimpses into the lives of the other characters. At times they don’t seem nearly as important as Margot’s journey, but the blame for that could be placed on the selfishness of the character, so rarely thinking what effect her decisions could have on those around her.

Michelle Williams delivers yet another grand performance, alongside Luke Kirby who also holds his own against her. Their characters, well crafted by Polley, allow us to reflect on desire and whether wanting something we shouldn’t want is good or bad. There is one scene of the two on an amusement park ride, so full of color and life and music, that perfectly captures a brief encounter with romance. The way Williams and Kirby look at each other shows how entranced they are by one another and how much fun they could have exploring such feelings.

Of course, every ride comes to an end, and with it comes the harsh realization that maybe it’s not all fun and games. Take This Waltz is as charming as it is unsympathetic, presenting an all too realistic look at life that some might shy away from, but some will find themselves blown away by.